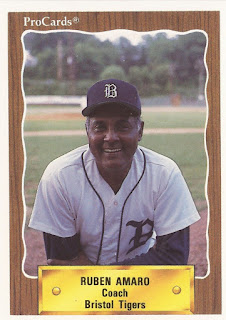 "Amaro must have been the most improved player in the majors last year,'" Mauch told The Associated Press that January. "He moved in a couple of steps at short and became a star. He also became a tough hitter."

Mauch made those observations as Amaro entered his fourth season in the majors. He went on to see time in a total of 11 seasons. He then went on to a post-playing career as a coach, both in the minors and in the majors, as well as a scout.

Amaro's career began in 1954, signed by the Cardinals as a free agent out of his native Mexico. Amaro is also credited as Ruben Amaro, Sr. His son, Ruben Amaro, Jr. also played in the majors.

Amaro started with the Cardinals with their Class C team in Mexicali. He moved up to AA Houston for 1956 and then AAA Rochester and major league St. Louis in 1958.

Amaro got into 40 games for the Cardinals that year, hitting .224. He then moved to the Phillies for 1959 and returned to the majors with Philadelphia in 1960.

In August 1964, Amaro received credit from teammate Richie Allen for helping his team to a win.

"What good would that homer have been if Ruben Amaro didn't pinch hit the tying run home in the eighth," Allen told UPI afterward. "He set it up."

Amaro soon started work as a scout with the Phillies. He tried his hand at managing in the minors in 1977 at short-season Auburn, then returned to the majors in 1980 as first-base coach for the Phillies.

He moved to the Cubs as third-base coach in 1983, then arrived with the Tigers for 1989 as manager at rookie Bristol. Amaro then moved back and forth between managing, scouting and coaching. In 2007, he served as Latin America scouting coordinator for the White Sox.