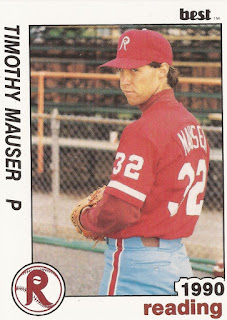 Tim Mauser took a no-hitter into the sixth inning, losing it on a double. But he stayed in this early August 1989 game with AA Reading, completing it and giving up only two more hits, The Reading Eagle wrote.

"Mauser did a heck of a job," Reading Manager Mike Hart told The Eagle. "That's his best outing by far this year. I think he had better velocity on his fastball than in any appearance this year."

Mauser would have a better outing. By the end of that month, he would have a full no-hitter, against New Britain.

Mauser was in his second season as a professional in 1989, selected the year before by the Phillies in the third round out of Texas Christian University.

He would go on to a career that spanned nine professional seasons, and include time in four major league seasons, all as a reliever.

Mauser started out of the draft at single-A Spartanburg, making Reading that year. He split 1989 between single-A Clearwater and Reading and returned to Reading for 1990. He saw his first time at AAA that year, playing the majority of the season at Scranton.

It was in 1991 that Mauser was called up to Philadelphia. He got into three games that July, giving up nine earned runs in 10.2 innings. He wouldn't see the majors again until 1993.

In 1993, Mauser got into a career-high 36 games. Eight of those came with Philadelphia. The other 28 came with San Diego. He was traded to the Padres that July.

At the end of that month, Mauser gave up an 11th-inning three-run home run, sending San Diego to a loss against the Cubs. In September, he also gave up Mike Piazza's 30th home run in Piazza's Rookie of the Year campaign.

He returned to San Diego for 1994, getting in another 35 games, posting a 3.49 ERA. He got a win in a June game, getting the final out in the eighth inning. He gave up a two-run home run in a July game, but also struck out the side in an inning.

Mauser also picked up his first major league save in July, finishing off a 14-inning game against the Mets. "This was under extenuating circumstances," Mauser told reporters afterward. "We just ran out of guys."

In 2005, Mauser was inducted into the TCU Lettermen's Hall of Fame. He currently works in real estate in Texas.