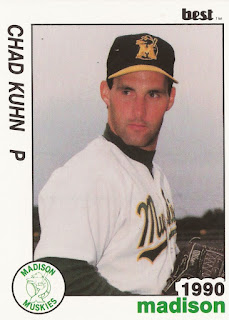 Chad Kuhn arrived at the tryout prepared. He was prepared to be the next big Athletics hitter, he told The Albuquerque Journal years later.

The Athletics and manager Tony LaRussa ended up wanting Kuhn. But it wasn't as a hitter, The Journal wrote.

"They were amazed with the physicality I came in with. They looked at my agent and (told him they would) sign me as a pitcher. Tony LaRussa asked me what this bicep was all about. I told him," Kuhn told The Journal, laughing, "that I thought I was gonna be one of the Bash Brothers."

Kuhn went to that tryout having been a position player in his first two professional seasons. He signed with the Athletics as a pitcher, but that could extend his career only three more seasons. He never made AAA.

Kuhn's career began in 1988, taken by the Padres in the 31st round of the draft out of the University of New Mexico.

He started at short-season Spokane as a first baseman. In 47 games, though, he hit .150. He started his career 0 for 11, before breaking through with a two-run single that gave Spokane a lead.

"I was so happy for him," Spokane manager Steve Lubratich told The Spokane Chronicle afterward of Kuhn and his hit.

He moved to single-A Waterloo for 1989, hitting 202 there. He was then released.

Signed by the Athletics for 1990, the pitcher Kuhn returned to the Midwest League, this time to Madison. In 21 outings, seven starts, he had a 3.18 ERA.

Kuhn moved to AA Huntsville for 1991, ending with a 5.96 ERA over 43 relief outings. He returned to Huntsville for most of 1992, getting some time at high-A Modesto. Overall that year, he had a 4.52 ERA. It was his final season as a pro.

Kuhn has since returned home to New Mexico and become a high school baseball coach. He's coaching in 2016 at Valley High School in Albuquerque.

He and his family have also seen adversity. In January 2015, a fund raiser was held to benefit the family. Kuhn's daughter Faith underwent 11 surgeries by the age of 8, diagnosed with spina bifida, according to The Journal.