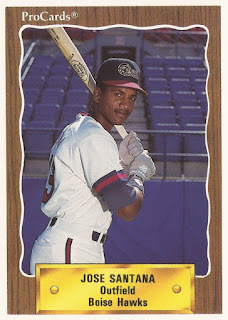 The Boise Hawks needed to get something going in this July 1990 game and Jose Santana came through, according to The Eugene Register-Guard.

The Hawks without a hit, Santana led off the fourth inning with a bunt single. The Hawks went on to score four runs in the frame, all the runs they'd need for the win.

Santana knocked that bunt in his second season as a pro. That season also marked his last professional season. Santana never made single-A.

Santana's career began in 1989, taken by the Angels in the 41st round of the draft out of his native Puerto Rico.

Santana played his first season with the Angels in the rookie Arizona League. In 42 games, he hit .286, with 16 RBI and 14 stolen bases.