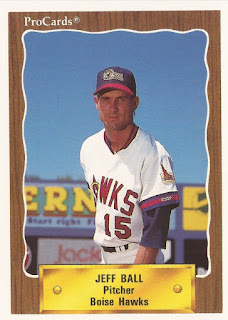 Jeff Ball gave up a few runs in this late-July 1990 game - none earned - but the runs didn't matter. Ball still picked up the win.

Ball gave up two hits over two innings of work, giving up three unearned, according to The Bend Bulletin. Ball's Boise Hawks went on to beat rival Bend 12-8 and Ball got credited for the win.

Ball's short career began that June, taken by the Angels in the 33rd round of the draft out of the University of Hawaii at Manoa.

At Hawaii, Ball picked up nine saves in 1989, still tied for seventh all-time at the school. His 14 career saves are good for sixth.

He appeared in 35 games in 1989, second best. His follow up saw him in 30 games, tied for fourth best at the school. He helped finish off a one-hitter against Notre Dame in February 1990.