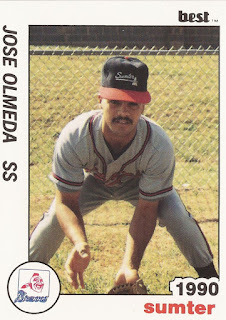 Sumter Braves manager Ned Yost talked to The Sumter Item about his team's first-half success in 1990. He named five players, including Jose Olmeda, as being key to that success and who moved up mid-season.

"If we had kept those guys here all year there's no doubt in my mind that we would be 10 games up right now," Yost told The Item.

Of the players Yost mentioned, three of them made the majors. Olmeda was one of the two who didn't.

Olmeda did, however, go on to a career that spanned 12 seasons. He made AAA in five of those seasons, he just never made the bigs.

Olmeda's career began in 1989, taken by the Braves in the 23rd round of the draft out of Oklahoma Baptist University.

At Oklahoma Baptist, Olmeda scored 78 runs in 1989. It was a school record not eclipsed until 2008. He scored one of those on a two-run home run in the NAIA World Series that May.

With the Braves, Olmeda started at rookie Idaho Falls, hitting .248. He moved to single-A Sumter to start 1990. In 103 games there, he hit .253, with seven home runs. He also got moved to single-A Burlington and saw two games at AA Greenville.

He knocked a double in the 1990 season-opener for Sumter. A few games later, he hit a home run in a Sumter win. In May, Sumter hitting coach Ralph Rowe described Olmeda to The Item as having "a nice, short stroke."

"I'd rather see him hit .330 with no homers," Rowe told The Item, "but I know he has the power to get the ball through the alleys and that's what you have to have to be a good hitter in the big leagues."

Olmeda's first look at AAA came in 1994 at Richmond. He played the entire season there, hitting .230 in 109 games. A June Olmeda double proved the difference in a Richmond win.

He split time between Greenville and Richmond in 1995. He hit a home run in a May Richmond win.

After playing 1998 back with the Braves at Richmond, Olmeda isn't recorded as playing in 1999. He then played two seasons in independent ball, ending his career.