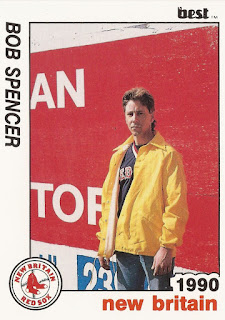 Bob Spencer's appearance on a baseball card in 1990 must have been a surreal experience, considering baseball cards represented his living.

Spencer, also known by his full name Robert G. Spencer, Jr., served as president of American Card Investors, a North Haven, Conn., based card business. (Spencer's role in the company isn't identified on his card, but internet searches identify him with the company.)

Spencer appeared to get his card after his company invested in sponsoring the New Britain Red Sox Best card release. Its logo appears on the back of each New Britain card issued in the Best set. The story behind his picture is unclear.

Spencer's card back includes a larger logo, accompanied by the business's motto "Invest in the Best" and its contact information.

Along with his role at American Card investors, Spencer also served 20 years as a longshoreman at the Coastline Terminal of New Haven. In baseball, he served as a coach for the Woodbridge Little League.

Spencer's family included those details in his obituary. Spencer passed away in March 1998 at the age of 45 after a brief illness, according to the notice of his passing published in The Hartford Courant.

Spencer was married and a father of two. 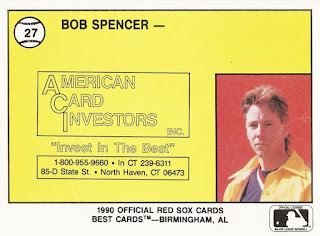