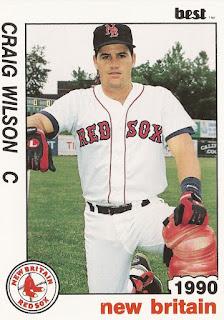 Lynchburg backup catcher Paul Devlin knew his role with the team, he told the Orlando Sentinel in 1988.

''I realized the situation," Devlin told the Sentinel. "The starting catcher Craig Wilson is a big investment for the Red Sox organization."

Wilson became that investment as an early round draft pick in 1987. For the Red Sox and Wilson, though, that investment never really panned out. In six seasons, he made AA, but didn't make it higher.

Wilson's career began that year in 1987, taken by the Red Sox in the third round of the draft, out of Cerritos College in California.

At Cerritos, Wilson picked up four hits in an April 1987 game, hitting two home runs. In another April game, he hit an extra-inning sacrifice fly to seal a Cerritos win.

Wilson stayed at Lynchburg for 1989, getting his average up to .239. He singled and scored in a May game.

For 1990, Wilson moved to AA New Britain. But he only got into 37 games. It was back to Lynchburg in 1991, still hitting just .223. He picked up two doubles and two RBI in an early May game. But that was his final season with the Red Sox.

Wilson moved to the Mariners system for 1992. He spent time between single-A Peninsula and AA Jacksonville, but it was his last season as a pro.