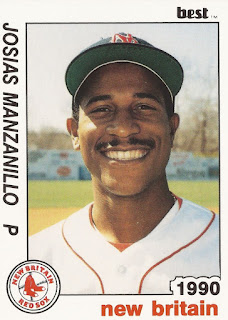 In spring 1994, Josias Manzanillo's manager Dallas Green thought Manzanillo might not be doing his best to make the team, according to The New York Times.

Green spoke to the Times that July, as Manzanillo was in the midst of a 15-outing scoreless streak.

"(Pitching coach Greg) Pavlick and I both felt that we weren't seeing a pitcher who was really using his stuff and was going to compete," Green told the Times. "He just didn't bust after it."

But he did make the team, and had success. In 37 total outings on the year, Manzanillo ended with a 2.66 ERA and two saves.

He went on to a major league career where he saw time in 11 seasons, getting into 267 total games. He last played in the majors in 2004.

Manzanillo's professional career began in 1983, signed by the Red Sox as an amateur free agent, out of his native Dominican Republic at the recorded age of just 15.

Manzanillo started at short-season Elmira. He made AA New Britain in 1987 and hit AAA Pawtucket in 1990.

Manzanillo stayed with the Mets into 1995, moving to the Yankees mid year. For 1996, he played in Taiwan. For 1997, he returned stateside, with the Mariners. He got into 16 games in Seattle. He also had the outing for which he is likely best remembered.

That April, Manzanillo was struck groin by a line drive hit by Manny Ramirez, and Manzanillo wasn't wearing a cup. The result was surgery.

"I don't think fans knew me before," Manzanillo told reporters later. "That's some way to get famous."

After playing 1998 back in the minors, Manzanillo returned to the bigs in 1999, returning to the Mets. He then moved to Pittsburgh for three seasons, including a 71-outing 2001. He finished out his career in 2004, with the Marlins.

In June 2004, Manzanillo picked up a win in relief against the Braves.

"When you win, you're always happy," Manzanillo told the Associated Press. "Every time the manager calls for me, I'm ready."

Through his attorney Manzanillo denied the allegations, admitting to purchasing one cycle, but never using it.