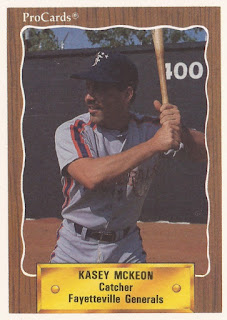 Kasey McKeon hit his first home run of 1990 in one May game, then picked up four hits in his next contest, according to The Greensboro News and Record.

McKeon was more comfortable hitting singles and doubles, like he did the second night with single-A Fayetteville, than he was hitting a home run.

"A little man like me has no business hitting a homer" the 5-foot, 9-inch McKeon told The News and Record afterward.

McKeon didn't end up hitting much in his brief pro career. He has since gone on to try and find others who could hit. He's spent much of his time since as a scout.

McKeon's career began in 1989, taken by the Tigers in the 34th round of the draft out of San Diego State University. McKeon is the son of longtime major league manager Jack McKeon.

McKeon told The Cincinnati Enquirer years later the impact of growing up the son of a manager had on his knowledge of the game.

"I think he taught me more than he could ever imagine by not even speaking," McKeon told The Enquirer. "I was around a big-league ballpark all my life. I learned what it takes to play up there. I couldn't do it, but I tried."

McKeon played his first season between rookie Bristol and single-A Fayetteville. He hit .226 between them over 44 games. He hit one home run with 13 RBI.

He then moved to Fayetteville for all of 1990. He knocked a single in an April game. Overall, he hit just .183 over 104 games. He returned for a brief, two game stint with independent Reno in 1991, ending his playing career.

McKeon soon started scouting, signing with the Padres. He moved to the Indians by 1995. He got an early look at Sean Casey, scouting him at Richmond.

"There's no better person you can hope for as an All-Star," Kasey McKeon told The Pittsburgh Post-Gazette later as both were with Cincinnati.