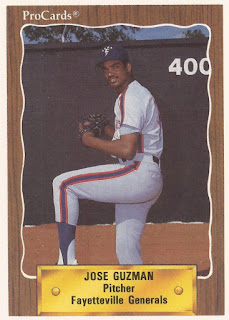 The Fayetteville Observer previewed the 1990 season that April, highlighting the players who returned from the previous year and some of the new ones.

The Observer couldn't highlight all the players. The "Other members" line toward the bottom took care of that. Among those other members: Jose Guzman.

Guzman made his debut in single-A that year, his second year with the Tigers system. He pitched in 26 games. He didn't return for 1991.

Guzman's career with the Tigers began in 1989, signed by Detroit as a free agent. Online baseball sites, though, have his overall career starting three years earlier, in the field.

Both Baseball-Reference and The Baseball Cube, indicate Guzman originally signed with the Yankees out of his native Dominican Republic and played in the outfield.

Neither his 1990 ProCards card, nor his 1989 Bristol Tigers card, however, credit a prior Yankees stint.

The Guzman with the Yankees started in 1986 in the rookie Gulf Coast League. The outfielder got into 15 games, hitting .167. He returned to the GCL in 1987 and played a game at short-season Oneonta. He hit .233, ending his brief outfield career.

After not being credited with playing in 1988, he signed with the Tigers for 1989. He played that year at rookie Bristol and turned pitcher.