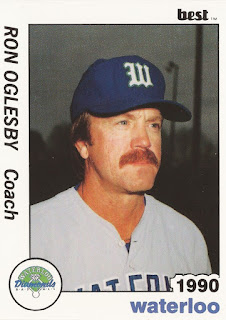 Ron Oglesby had a brief playing career, one where he never made the majors. In his coaching career that followed, though, Oglesby made the bigs as a bullpen catcher with the Padres.

In September 1987, after the passing of his father, Oglesby spoke to The Los Angeles Times about the importance his job with San Diego had for his dad.

"My dad always dreamed I'd be a big-league player, and it never happened," Oglesby told The Times. "But in these last few years, watching me do what I do . . . do you know he used to wear a Padres cap? . . . I think he died a happy man."

Oglesby's career in baseball began in 1968, taken by the Twins in the 11th round of the draft out of Ramona High School in Riverside, Ca.

He played just one more season. He got 12 games back at Charlotte in 1972, then two outings at AAA Salt Lake City, ending his playing career.

By 1984, Oglesby had started his coaching career. He served with the Padres as bullpen catcher for four seasons. In 1988, he moved to the minors, serving as pitching coach at Riverside.

That May in 1988, Riverside lost a 21-inning marathon, one where Oglesby pressed himself into service for two innings, according to The Riverside Press-Enterprise.

"I forgot the last time I pitched, maybe 15 years ago," Oglesby told The Press-Enterprise. "It felt strange …You might lose a game but you save an arm or a career. I wanted to win it for the kids because they worked their butts off. I didn't care what I looked like."

Oglesby moved to single-A Charleston for 1989 and then to single-A Waterloo as pitching coach for 1990.

For 1991, he was back in the majors, serving as Padres bullpen coach, continuing into 1992.