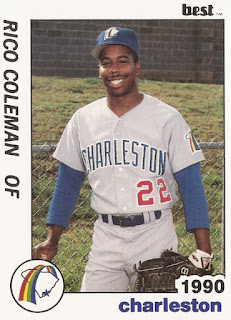 Rico Coleman had a big game this night in July 1989. He went 4 for 5, stole two bases and scored three times, according to The Spokane Spokesman-Review.

Coleman, though, pointed to a "good team effort," for the Spokane win, specifically praising Spokane reliever Dan Deville, according to The Spokesman-Review.

Coleman's time playing behind guys like that, or any other kind of pitcher, ended up being limited. Coleman was in his first season as a pro. He only got into one more.

Coleman's career began that June, taken by the Padres in the 36th round out of Grambling State University.

Coleman started with the Padres at short-season Spokane. He knocked a bases loaded single in a July game, then a two-run triple later that month. He batted in a run in an August game.

He even stole home for the go-ahead run in an unusual August situation. With the bases loaded, the runner on first got caught off base, Coleman than ran home, according to The Spokesman-Review.