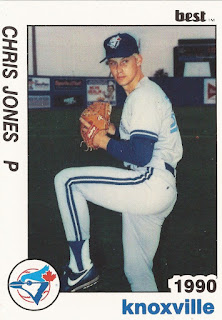 Florence Blue Jay pitcher Chris Jones had some good company on the mound that day in Charleston, S.C. in 1986. But that company wasn't his opponent in the game - it was the guy who took the mound before him.

Jones ended up playing in two more seasons. He started 1991 back at Knoxville, before moving mid-season to the Dodger system and AAA Albuquerque. He played his final games in 1992, with the Cardinals at AAA Louisville, ending his career.