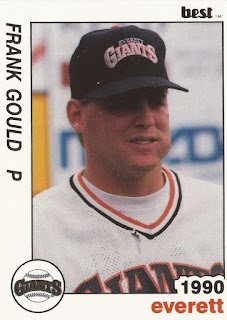 The Pocatello Giants cruised to the win, putting up 10 runs to Salt Lake's one in that August 1989 contest.

Helping keep the Salt Lake numbers down was Pocatello starter Frank Gould. For his effort, he earned his third win on the season, to four losses, according to The Deseret News.

But, while Gould's effort was good enough for a win that night, Gould couldn't pitch his way to a long career as a pro. In a career that lasted just three seasons, Gould never got above single-A.

Gould's professional career began in 1988, with the 18-year-old Huntington, W.V., native being signed by the Giants as an amateur free agent.

Gould then first made it on to the field in 1989, playing between rookie Pocatello and single-A Clinton.

With Clinton, Gould got into a single game, giving up four earned runs in 2.1 innings of work. With Pocatello, though, he got into 13, starting nine. Overall, he went 3-4 in Idaho, posting that 3-4 record.

For 1990, Gould moved to short-season Everett, getting into 17 outings, all in relief. In 30 innings of work, he posted a 3.60 ERA. It was his last of two seasons with the Giants organization.

Gould signed with the Orioles for 1991, getting assigned back to rookie ball, at Bluefield. At Bluefield, Gould, turned starter again, went 3-6 in 12 outings, 11 starts. His ERA hit 4.14. It was his final year as a pro.