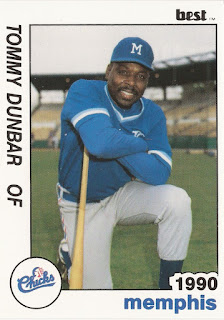 When a new manager comes on, it's time to younger players to show what they can do. For Tommy Dunbar in 1985, the Rangers got a new manager and he hurt his ankle, according to The Oklahoman.

Dunbar had spent the entire season with Texas, to that point, his third season with time in the bigs. Soon, though, after a disabled list stint and poor play upon his return, he found himself back at AAA Oklahoma City.

"It was just one of those things," Dunbar told The Oklahoman late that July. "It was a bad break for me. I've just got to get myself back together again and show 'em I can play again."

Dunbar was in his sixth year as a pro, coming off his latest stint in the majors. That stint, though, would be his last. He ended up playing in six more seasons in the minors, but he never would return to the bigs.

He later returned home to South Carolina, teaching the game to local youth through baseball camps. He did that until his death in 2011, at the age of 51.

A native of South Carolina, Dunbar's career began in 1980, taken by the Rangers in the first round of the January draft, out of Middle Georgia College.

With the Rangers in 1983, Dunbar debuted Sept. 7, getting into 12 games through the end of the season. He picked up six hits in 24 at bats, knocking in three.

For 1984, Dunbar started the year at Oklahoma City. By the end of June, he hadn't gotten his second call to Texas, though he was hitting .338 at AAA. There was even talk in The Oklahoman that he just wasn't in the Rangers' plans.

"The knock on him isn't his fielding," Oklahoma City manager Tommy Burgess told The Oklahoman. "It's just a little bit of everything. He's a wild swinger and people don't like that type of thing. He'll swing at a ball over his head or croquet a shot from off the ground."

Soon after, though, he returned to Texas, getting into 34 games on the year. He hit .258, hitting two home runs and knocking in 10.

Dunbar returned to Texas again in 1985, starting the season with the team. He also stayed on into July, getting into 45 games in all. But he hit just .202 with one home run. Sent down to Oklahoma City, he didn't get back.

Dunbar played the entire next season at Oklahoma City, hitting .290. He then moved to the Pirates system for 1987, the Braves system for 1988 and then a succession of teams through 1991.

In 1990, the former major leaguer even played the season at AA Memphis, with the Royals. He played his final season, his 12th as a pro, in 1991.

After a brief stint as manager with the Reds at rookie Princeton, Dunbar returned home to Aiken, SC, the former major leaguer holding a number of baseball camps for local Aiken youth over the years.

Dunbar passed away in March 2011, after a battle with prostate cancer.

"He was such a proponent of baseball, and he was always doing something to help kids," longtime Dunbar friend and University of South Carolina Akin athletic director Randy Warrick told The Aiken Standard after Dunbar's passing. "He probably influenced more children's lives than we'll ever know. He made it all the way to the big leagues from a small town, and he came back and continued to promote the sport."