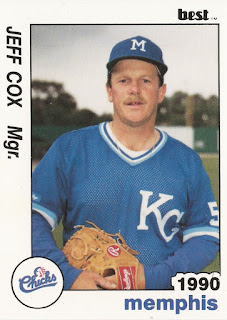 The score was tied in the top of the ninth. After Cox sent that runner, the score was no longer tied.

"Shoot, it's the ninth inning and that makes the second out, so let's make it happen and hopefully the throw is offline a tad," Cox explained to The Tribune after the win. "And the more you practice, the luckier you get."

Cox had had plenty of practice by that point. A former major league player and manager in the minors, Cox was in his eighth-straight season manning the coach's box at third. It's all been part of a baseball career that now dates back nearly four decades.

As a player, Cox had even executed another gutsy call as a runner on third - a steal of home.

Cox's baseball career began back in 1973, signed by the Royals as an amateur free agent out of South Hills High School in California. Cox, though, didn't get on an affiliated minor league field until 1975, after signing a new contract with Oakland.

Cox debuted with the Athletics July 1. By July 4, he was taking off for home. In a game against the White Sox, Cox got the green light at third as the pitcher went into a windup. Cox made it, scoring the Athletics' second run.

To The Associated Press afterward, Cox said he wasn't surprised by the call. "Billy Martin is so aggressive," Cox told The AP. "I've been told that if he went into a windup, I go. I got a good jump."

Cox ended up getting into 59 games that year for the Athletics, hitting .213 and stealing seven other bases. He then returned to Oakland in 1981, but for just two games, the final two games of his major league career.

By 1986, Cox had started his new career, as a manager in the minors. He managed that year at rookie Billings in the Reds' organization. He made AA in 1989, with the Royals at Memphis. He stayed at Memphis for three seasons, then took the helm at AAA Omaha in 1992.

Cox continued managing in the minors through 2000, with a stint in Kansas City as third base coach in 1995.

Cox joined the Expos system in 1999, as manager at AAA Ottawa. He then joined the big club the next year as bench coach, starting his run as a coach in the majors.

Cox then moved on to coach with the Marlins, Pirates and then the White Sox. In 2013, Cox signed on with the Tigers as a base-running consultant.

In 2006, as third base coach with the Pirates, it was a Cox decision to send a runner at third that ended up winning a game - in the 18th inning. The call was saved by missed catch by the catcher and a collision at home, The Pittsburgh Post-Gazette wrote.

"You've got to take a shot," Cox told The Post-Gazette. "Nothing to lose."