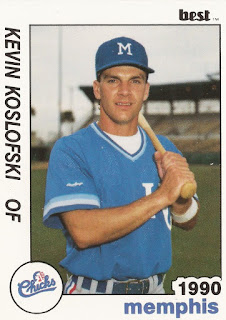 Kevin Koslofski played his way through six seasons in the minors - then he got to AA.

Koslofski eventually did make the majors. In getting there, he pointed to his time at AA Memphis, picking up a .213 average his first year there to a .324 mark his second.

"I'd always been a hard worker, but I didn't have a good concept of hitting," Koslofski told The Lawrence Journal-World February 1993. "Once I really started believing, I really took off."

That second year at Memphis, Koslofski also got his first look at AAA Omaha. The next year, he took off to Kansas City.

Koslofski's pro career started back in 1984, taken by the Royals in the 20th round of the draft, out of Maroa-Forsyth High School in Illinois.

Koslofski began with the Royals at short-season Eugene, hitting .187 in 53 games. He played the next year in the rookie Gulf Coast League, moving to single-A Fort Myers for 1986 and 1987.

Koslofski actually stayed in the Florida State League for four total seasons, two at Fort Myers and two at Baseball City. In his last season there, in 1989, Koslofski hit .259, stealing 41 bases.

Koslofski started 1992 at Omaha. In late June, he debuted in Kansas City. In late August, Koslofski hit his first major league home run. He did it off none other than Nolan Ryan.

"Some things in life are precious, and hitting that home run was one of those moments," Koslofski told The Associated Press afterward. "I'll always remember this. This is really special because I played in the minors for eight years. If there is a cloud nine, I'm on it."

Koslofski finished the year with time in 55 games and an average of .248. He also hit two other home runs and knocked in 13. One of those 13 RBIs came in the second-to-last game of the season, and it was the game-winner.

Koslofski returned to Kansas City in 1993, but for just 15 games. In 1994, he got just two. Each year he played out the seasons back at Omaha.

Koslofski moved to the Brewers for 1995, but he didn't make it back to the majors until 1996, for 25 final big league games. His playing career then ended the next season, with one last year at AAA, with the Cardinals.

Koslofski has since gone on to help younger players. In 2009, he helped start a new team aimed at getting local players in his hometown before scouts. One of his players was a local graduate named Danny Walker. Walker told The Decatur Herald & Review Koslofski's team offered a chance to get noticed.

"Plus, and this is first and foremost, I wanted to play for Kos," Walker told The Herald & Review. "He played in the pros and I can learn a lot from him. With him, I feel like I can get better and have fun doing it."