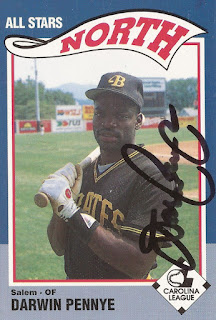 When Darwin Pennye moved away from playing baseball, he was ready for some tough times.

He'd played the game growing up, through college and for five seasons professionally. He had other plans, but those would take time to realize.

To get through that time, Pennye recalled to The Greatest 21 Days, he did what he'd done since his freshman year in college. He turned to his faith.

"It's everything to me," Pennye said of his Christian faith. "It helped me transition to life away from professional baseball at age 26. I thought that would be the toughest time in my life, but I'm thankful that God freed me up to let me know that I was more than just a baseball player, that I was a man and I was a child of God."

He's since gone on to a career as a coach and athletic director for Christian schools in the Houston area. He took his latest position in summer 2015 with Logos Preparatory Academy.

"A lot of times I run into people who are like, "Man, what are you doing at that little bitty school?" Pennye said. "I'm like, 'I'm right where God wants me to be. I get to make an impact on these kids' lives on a daily basis."

Pennye shared his story recently by phone with The Greatest 21 Days. He covered his career from growing up in Tyler, Texas, to the pros and his time since as a Christian school coach.
Pennye played five seasons in the minors. He made it up to AA, but he never made the majors. He ended his career after turning 26 in 1992. That was the age that he promised himself he'd stop at if he wasn't in the majors or close.

Pennye believes he could have still had a job the next year, but he knew few outfielders broke into the bigs after the age. The odds go down significantly.

Pennye also didn't want to be a hanger-on.

"I didn't want to drag my wife around the minors for 10 years," Pennye said. "That was no good. At that point I had really made up in my mind that that was it and I knew it. Life had to move on at some point in time."

Pennye took a few years away from the game and worked what he called a normal life. He returned to baseball for 1998 as a coach in the minors. A friend called up and said the Astros were looking for someone to coach and Pennye was hired.

Pennye spent two years at short-season Auburn. Pennye said it was nice being back in the league where his playing career started. But by the end of the 1999 season, he realized he wasn't where he needed to be.

By then, Pennye had started to really immerse himself in his church and ministry. The schedule of a minor league coach didn't fit with that.
He soon found himself as a coach at a Christian high school, St. Pius X in Houston, moving to Bay Area Christian School and then Logos in 2015.

Central to his own work and his marriage to his wife Maria has been their faith.

Pennye met his future wife in college, after he returned to school following the disappointment of not being drafted after his junior year at Southwest Texas State. Maria was with Pennye through his five professional seasons, as well as his coaching stint.

He said their faith got them through both.

"I think it sustained us," Pennye said. "It allowed us to handle the bumps and the bruises, the highs and the lows, the peaks and the valleys of being a minor league player and a gain as a minor league coach."

They have no children of their own. Pennye focuses on the kids at school, his players.

Pennye found his own faith during his freshman year in college. He was saved at Harding University, a faith-based school in Arkansas. That has continued strongly in the years since.
"My faith right now is the thing that sustains me and carries me," Pennye said at another point. "I'm glad that I found God, even at a time when I probably wasn't looking for Him."

He said he uses it every day. He can integrate it on the field. When he's taught, he could integrate it there, too.

"At the end of the day, baseball is still baseball," Pennye said. "I treat these guys very similar to the way that I treated professional ball players. I give them everything up front. I try to be as honest with them as my first manager Stan Cliburn was with me."

He knows there are differences. The expectations are different from a physical standpoint. But it's the same fundamental approach, Pennye said. "I just now have an opportunity to inject a lot more life lessons."

He's done that not only as a baseball coach, but also coaching other sports. He's coached football throughout, as well as some basketball and even cross-country.

"The majority of these kids that I coach are not going to play even at the collegiate level," Pennye said. "It's about imparting wisdom and life lessons in them and this is one of the things that I feel like I was gifted to do."

Be sure to read Part 1: Darwin Pennye, Better Position
Posted by Steve78 at 11:54 PM