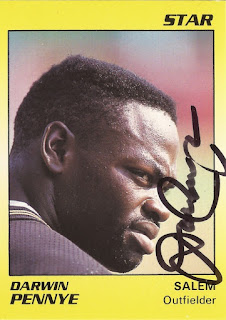 When Darwin Pennye started his career he had his path laid out.

He knew where he wanted to be, the majors. But he also decided there was a time limit.

"When I signed my first professional contract," Pennye recalled to The Greatest 21 Days, "I made a deal with myself, that at age 26, if I wasn't in the big leagues by 26 or knocking very hard on the door, that was probably going be it."

It was going to be it, Pennye said, because he had other things that he wanted to do in life.

So, when 1992 came, the year he turned 26 years old, Pennye's career ended. He'd made AA, but there was seemingly no hope of making the majors.

"After we played our last game ... I sat in front of my locker," Pennye recalled, "and I cried because I knew it was over."

His playing career was over, but a new career as a Christain school youth coach and athletic director was eventually in store.

His job in 2015 is as athletic director for Logos Preparatory Academy near Houston, where he spoke with The Greatest 21 Days recently by phone about his playing career and his career since.
In all, Pennye played five seasons as a pro, the first four in the Pirates organization and his final season between the Cubs and Expos system.

Along the way there were some big games.

There was the one on his 25th birthday - a year before his career deadline - where the AA Carolina Mudcat went out and hit two home runs in the same game against Charlotte.

It was the only time in his professional team that he had done that. He'd hit two home runs in one day before, in 1988 at short-season Watertown, but those were in opposite ends of a double header.

In the Carolina contest, Pennye recalled looking for the same pitch on the second home run as he did on the first.

"I thought, 'Don't out-think yourself,'" Pennye said. "'He may throw you the same pitch he threw you the first time. He did. He threw me the same fastball trying to get it in and I hit it almost the same identical spot over the fence."

"That game will probably forever stick out in my mind as one of my favorite games," Pennye said.

There was another, earlier game that stuck out in the mind of a fan, Pennye recalled.
Pennye was with Salem in 1990 and Pennye hit a walk-off grand slam to win the game in extra innings. The fan, Pennye recalled years later sent him a ball to get signed.

The man had been at the game with his father. It was the young man's first professional game. The ball, Pennye was told, was for the father's 75th birthday and it would go with a replica of the field.

The man seemed to recall the game better than Pennye. Pennye'd hit the first pitch over the scoreboard.

Pennye responded  in the email exchange that the man had forgotten what Pennye did prior to that in the game: He went 0 for 4 with three strikeouts.

"It took me back to what my high school coach used to say," Pennye said, "'You're only as good as your last at bat."
Pennye first arrived in 1992 with the Cubs. The Pirates left him unprotected and Chicago selected him in the Rule 5 draft. It seemed as thought the writing was on the wall with the Pirates, he recalled.

So the Cubs took him and he spent the spring there. The team ended up not having room for him and he was released. Pennye was stunned that the Cubs would take him and then let him go, even after he'd had probably the best spring of his career.

He did get a photo out of the deal. In the picture Pennye is standing between Hall of Famers Andre Dawson and Ryne Sandberg.
"I always laugh," Pennye said, "and say whose the guy that doesn't belong in this picture?"

After being released by the Cubs, Pennye went home, but it was a brief stay. The Expos called and Pennye had a new team.

Pennye was ready to get back on the field.

"At that point I had already said 'Well, God, it's in your hands," Pennye said. "It was like the story of my career. I've always got to prove myself. Here we go again. I was thankful to still have the opportunity to have a uniform."

Montreal assigned Pennye to AA Harrisburg, a city where Pennye had played briefly two years before.

"That was a good thing about that crazy four days," Pennye said, "that I was going back to a place I was familiar with in Harrisburg."

Pennye hit .273 for the Senators that year over 101 games, but he wasn't a regular. He'd play several days in a row and then sit and be a late-inning defensive replacement.

Late in the season the team brought up a hot young outfielder named Rondell White. White was good and Pennye knew it. Pennye took White in and tried to show him what he knew, sort of in a Crash Davis vibe.

"He was the guy that it came to mind that I'm preparing for the job that I'd like to have," Pennye said. "I'd like to be the left fielder for the Expos. But in reality, this guy's going to be that guy."