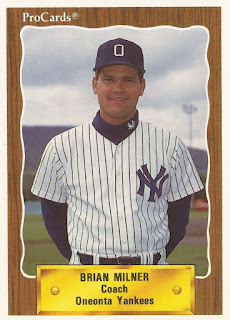 Brian Milner returned to the field in 1990 as a coach with the Yankees at short-season Oneonta after being away from the game for seven seasons.

He'd been a player in the Blue Jays system and he'd made the majors for two games. When the end came, it still came hard, he told The Greensboro News & Record later.

"When you get released, that's the ultimate rejection," Milner told The News & Record in 1991 as he served as a Greensboro coach. "They were saying you can't make the big leagues. I was bitter. But I guess the Lord really had to do a lot to get me in the spot I'm in now."

That playing career of Milner's ended with two seasons at AA and it ended in injury. Where it started, though, was rather unusual. A high pick for the Blue Jays, Milner started his career at the top. He jumped directly to the majors.

Milner's big league stint was brief, two games. He never got back. His return to the game turned in to a long stay as first a minor league hitting coach and then as a scout.

Milner's baseball career began in 1978, taken by the Blue Jays in the seventh round of the draft out of Southwest High School in Fort Worth, Tex.

After signing, Milner went straight to the big club and he also hit. He debuted June 23 at Cleveland. He went 1 for 4. His second game came three days later. He went 3 for 5 in that game, hitting a triple and knocking in two.

That second game turned out to be his last. The Blue Jays sent him all the way down to rookie ball at Medicine Hat. He played out the year there, hitting .307.

Milner returned for a full season in 1980 at single-A Kinston, then another the next year at AA Knoxville. His final time as a player came in 1982, with 37 games back at Knoxville.

He was then away from the game until 1990, when he got back into the game at Oneonta, as a coach. He stayed with the Yankees for six seasons, coaching at single-A Greensboro and high-A Prince William.