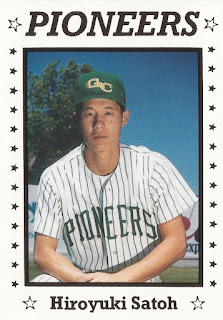 Salt Lake's Rich Bielski made his bid to break open this late August game, but Gate City shortstop Hiroyuki Satoh was there to stop him.

With the bases loaded, Bielski hit a liner Satoh's way, according to The Deseret News. Satoh snagged it for the out.

Satoh robbed Bielski in his only season in the United States. He went on to return to his native Japan, and see brief time in a total of seven seasons of Nippon Professional baseball.

Satoh's career began in 1988, taken by the Hiroshima Carp in the second round of the draft, out of Oita Prefectural Tsukumi High School in his native Japan. The Japanese form of Satoh's name is 佐藤裕幸.

Back with the Carp, Satoh continued on the second team until June 1993, when he made his debut with Hiroshima. In six games, he got six at bats, but didn't get a hit.

He returned to Hiroshima for at least one game in each of the next three seasons. He got his first NPB hit in October 1994, a double.

After spending two seasons away from the first team, he returned in 1999, with Kintetsu. That year, he got into a career-high 19 games. He picked up one hit in 10 at bats.

He returned to Hiroshima for his final two seasons, getting into five games in 2000 and then two in 2001, ending his career.