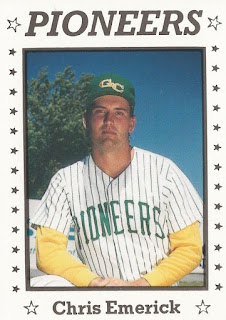 Chris Emerick was called a "good all-around athlete" in high school, one who played both baseball and football.

In baseball, he was a pitcher who also threw for the local American Legion team. In football, he was St. Mary's High School of Stockton's quarterback for 1983.

"I think we'll be able to run the ball well," St. Mary's head coach Frank Carido told The Lodi News-Sentinel as he assessed his team for the opener, "and our quarterback, Chris Emerick, is a good all-around player. He is mostly a rollout passer."

Emerick went on from high school to college, and the pros. His stint in the pros, though, was brief, one that came and went for Emerick at the age of 23.

Emerick's pro career began in early 1990, signed as a free agent by the Expos out of his native Stockton, Ca., according to his ProCards card.

With Karl Ross, Emerick shutout rival Lodi in a 1982 game, giving up just two hits, according to The News-Sentinel, helping his team to the state tournament. The next year, Emerick helped his team to the district championship game.

Out of St. Mary's High, Emerick then went to St. Mary's College of California. Then, when he turned 23, he was a pro, signing with the Expos. The Expos then optioned him to independent Gate City.

His pro career over, Emerick returned to the game in 1991, with the semi-pro Lodi Reds, according to The News-Sentinel. He threw a complete game in a July contest, striking out six.