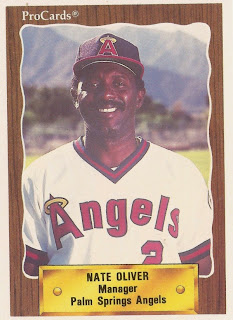 Nate Oliver came on to pinch run for the Cubs in this June 1969 game and he did his job. He didn't make it to second base but he did break up a double play that kept the inning going, according to The St. Petersburg Times.

The result: A two-run home run.

"There could have been a chance for a double play," Oliver told The Times. "But when you're playing this game it takes everything. Those little things count, too."

Oliver went on to a career teaching those little things as a manager in the minors. He's first credited as managing in 1988 and most recently independent ball in 2003.

Oliver's career in baseball began in 1959, signed by the Dodgers as an amateur free agent out of Gibbs High School in Florida.

He started at Class B Green Bay and Fox Cities, playing 1960 at Class C Great Falls. He then made AAA Spokane in 1961. His major league debut came in 1963 with the Dodgers.

After getting into just eight games in 1965, Oliver played 80 in 1966 and he helped the team to the pennant. He made one appearance in the World Series, as a pinch runner.

He played one more season with the Dodgers, then moved to the Giants for 36 games in 1968. His final major league season came in 1969, getting into 44 games with the Cubs and one with the Yankees.

Oliver went 0 for 5 in an April 1969 game for the Cubs, but he was credited with two key defensive plays, one turning a hit into a double play, according to The Chicago Tribune.

"I was really keyed up for this game," Oliver told The Tribune. "I wasn't going to be the one to let this team down."

Oliver played two more seasons in the minors, his last with the White Sox at AAA Tucson.

Oliver is next credited as working in the game in 1988, managing at high-A Reno. He managed 1990 and 1991 at high-A Palm Springs. In 1991, he watched over the Angels' new signee Fernando Valenzuela for a game.