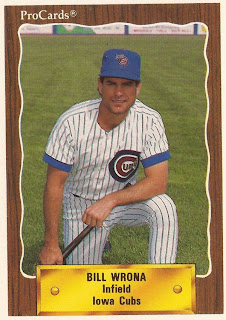 It was 1982 and Wrona's University of Miami team was on its way to the College World Series championship and, despite his problems, Wrona was right there along side them.

"He's been living on milk shakes and penicillin," The Post wrote. "Hurricane fans might say, 'From the neck down, Wrona's perfect.' He's lost eight pounds, but he's playing."

Wrona continued playing, into the pros for a total of eight seasons. Wrona, though, couldn't continue playing into the majors. He made AAA for parts of four seasons, but never made the majors.

The Oklahoma-native's professional career began in 1983, taken by the Mariners in the 10th round of the draft out of Miami.

Wrona also played a summer in Alaska, knocking home the winning run in a July 1981 game for the Peninsula Oilers.

Wrona arrived at Beaumont permanently in 1986, hitting AAA Las Vegas in 1987. He spent all of 1989 at AAA Las Vegas, but he couldn't make San Diego. He hit .223 his final year with the Padres system, but did pick up four hits in one June game.

For 1990, Wrona signed with the Cubs. It was the same organization that his brother Rick Wrona played for. The brothers even played together at AAA Iowa that year.

Bill Wrona hit just .216 that year in 76 games for Iowa. It turned out to be his final year as a pro.