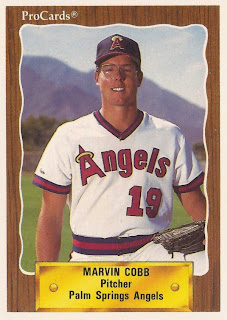 The Bend Bucks fell into an early hole in this August 1989 game. With the help of reliever Marvin Cobb and others, they climbed out and got the win, according to The Bend Bulletin.

The team went down 6-0 after two innings but clawed back. Cobb finished off with two hitless innings, picking up the win, The Bulletin wrote.

"You've still got seven innings to play," Gershberg told The Bulletin. "All you need is one run an inning as long as you get the pitching."

Cobb was in his first professional season that year with the Angels. He went on to play in three more. He never made AAA.

Cobb's career began that June, taken by the Angels in the seventh round of the draft out of the University of Oklahoma.

At Oklahoma, Cobb picked up a win in a March 1989 contest. He picked up another in April on three scoreless innings.

With the Angels, Cobb started at short-season Bend. He got into 23 games in relief, with a 5.84 ERA. He recorded a four-out save in June, then a late-loss in an early July contest. Cobb went 2-3 overall and recorded four saves.

He played most of 1990 at high-A Palm Springs, getting two games at short-season Boise. In 34 outings overall, he had a 4.38 ERA and four wins.