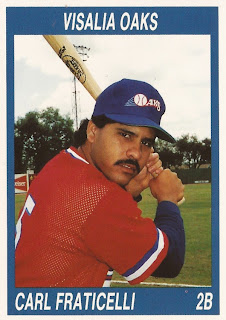 Carl Fraticelli's Hawaii Aliis had already set their playoff seed. In this late-July 2010 collegiate league game, though, the Aliis helped prevent the rival Waimea Waves from clinching theirs.

"We came out here still wanting to win a series," Aliis head coach Carl Fraticelli told the Hawaii Collegiate Baseball League site afterward. "They took it that way and came ready to play."

Fraticelli served as head coach for the Aliis in 2010, part of a long coaching career that continues in 2013 as a volunteer assistant coach at the University of Hawaii. That coaching career came after a brief playing one that saw him come ready to play in three pro seasons, but never above high-A.

Fraticelli's pro playing career began in 1988, taken by the Twins in the 19th round, out of Loyola Marymount University. At Loyola, Fraticelli played well enough to make the cover of the media guide.

With the Twins, Fraticelli started at single-A Visalia, playing second base. He got into just 35 games that year, hitting .275 with six RBIs. It would be Fraticelli's best season, and one with his most games played.

Fraticelli's playing career over, he became a scout for the Athletics, then coached at Diablo Valley College and Los Medanos College, according to his Hawaii bio. In 2006, he took the reins of the collegiate Hawaii Aliis. For 2013, he's serving his third season as volunteer assistant coach at Hawaii.

With the Aliis in 2010, Fraticelli's team secured the sixth seed. The team's playoff run, though, was brief, becoming the first team eliminated after an 8-6 loss.

"We battled as best as we could we just couldn't stay out of those big innings," Fraticelli told the league site afterward. "We gave up a two-run and five-run inning that separated the game right there."