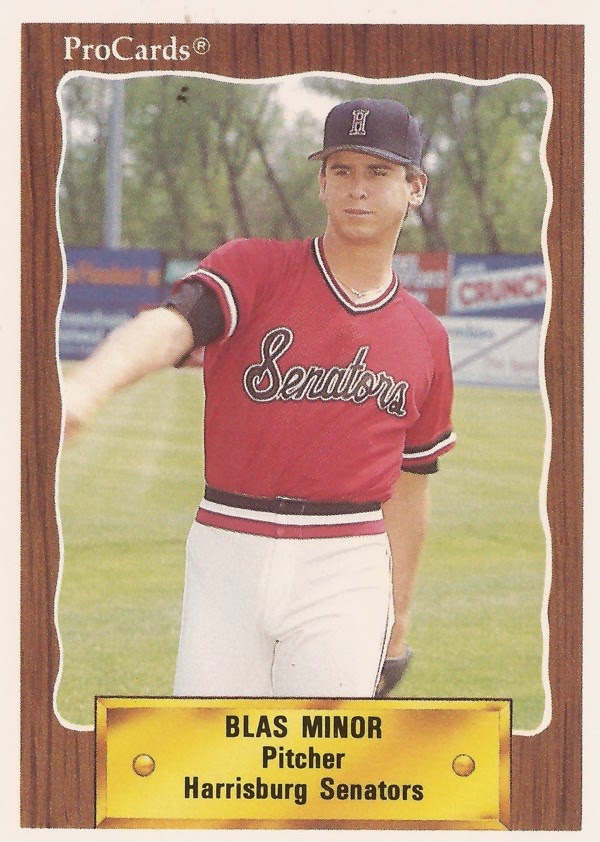 Taken in the sixth round of the 1988 draft by the Pirates, Blas Minor tried to assess what his chances were in his new organization, he told The Merced Sun-Star.

Coming out of Arizona State, the right-hander hoped to make his way to the majors in good time.

"They have a lot of young players, and yes, I've looked into the Pirates' pitching depth," Minor told The Sun-Star. "I think I have a good chance of sticking around awhile."

Minor stuck around with the Pirates through 1994, making he majors for the first time in 1992, his fifth year. He went on to stick around in the majors into 1997, pitching in six major league seasons.

After signing with the Pirates, Minor started at rookie-league Princeton. He got into 15 games in relief, posting a 4.41 ERA.

Minor made AA Harrisburg in 1990, getting a look at AAA Buffalo that same year. He saw more time at Buffalo in an abbreviated 1991, then saw Buffalo full time in 1992.

It was also in 1992 that Minor got his first major league appearance, a single appearance in July. Minor threw two innings, giving up one earned run.

In May, Minor received praise from his manager Dallas Green in a loss. Minor took the loss, giving up a home run at the end of three good innings, The New York Times wrote. Minor, though, wasn't hearing the praise.

"It's not like I can go home and feel good about myself," Minor told The Times. "I won't. You can't defense balls hit out of the park. I'm one of the culprits there."

Minor started 1996 with the Mets, then moved to the Mariners mid-year in a trade. That July, Minor went on a tear where he threw 8.2 innings of no-hit relief, The Seattle Times wrote. Half that run came in one outing.

"Minor did an outstanding job," Mariners manager Lou Piniella told The Seattle Times after that 4.1 inning hitless outing. "He kept us in the game. Thank God. He actually saved our bullpen. If he had not done the job, we really would have had to scramble."