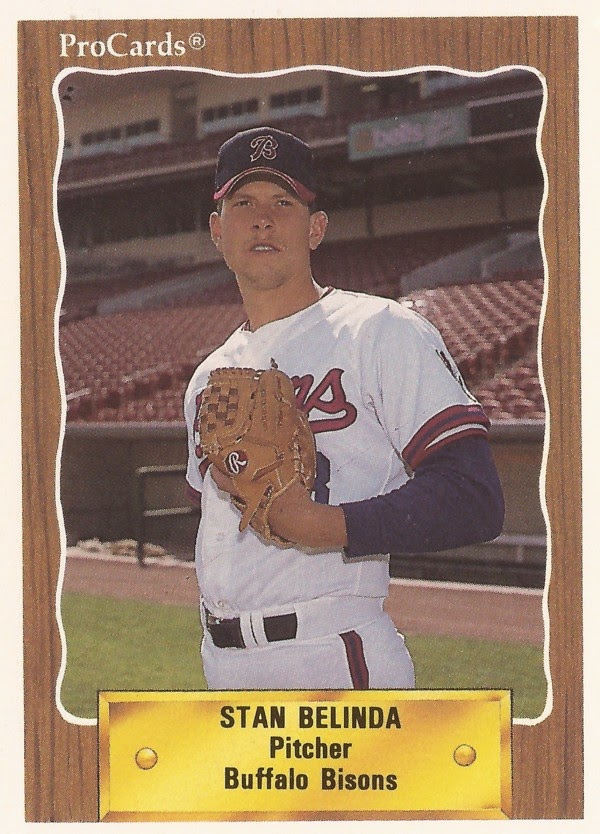 What began in May 1998 as numbness and tingling in his leg ended months later for pitcher Stan Belinda, with a diagnosis of multiple sclerosis.

Despite that finding though, Belinda continued pitching for parts of two more seasons, continuing a career that spanned 12, pitching in 29 games in 1999 and 56 in 2000.

"I hope some people find inspiration from this," Belinda told The Associated Press going into the 2000 season with Colorado. "My inspiration is my family and God. Unfortunately for me, I got some bad news, but I'm dealing with it and I'm trying to stay upbeat and trying to perform."

By the time he finished out with his final big league appearance in September 2000, Belinda had amassed a total of 585 appearances in the majors, all in relief, a 4.15 career ERA and 79 total saves.

Belinda's on-field performance, though, is perhaps best remembered - or best forgotten, depending on who is talking - for one ill-fated pitch thrown in perhaps the biggest playoff situation there could be: Game 7 of the 1992 National League Championship Series.

Belinda's professional career began in 1986, selected by the Pirates in the 10th round of the draft, out of Allegany College of Maryland. He stayed in single-A through 1988. In 1989, he debuted in AA, in AAA and in the majors.

With the Pirates that first September, Belinda got into eight games, giving up seven earned runs in 10.1 innings of work. He returned to Pittsburgh in May 1990, getting into 55 games, picking up eight saves and an ERA of 3.55.

He got his first save in late June, coming in to the bases loaded with Expos, nobody out, the score 5-3. Belinda recorded three-straight outs.

"I blew a couple save opportunities earlier this season," Belinda told The Associated Press after that game. "I had saves in the minors. I wanted to show the team that I could do it at this level, too."

Going into 1992, Belinda looked to be the team's official closer, though Pirate manager Jim Leyland was only ready to commit to late-game situations, The Pittsburgh Post-Gazette wrote. The chance was enough for Belinda.

Belinda ended up getting 18 saves that year in 59 outings. Then came the NLCS, and the save he didn't get.

In the ninth inning of Game 7, Belinda came into another bases-loaded situation, nobody out, his team up by two. Allowing one to score on a lineout, Belinda threw a one-out fastball to Francisco Cabrera, a fastball that Cabrera turned into a line-single to left. Two scored, sending the Braves to the World Series and the Pirates to where they've been each succeeding October: home.

By the next spring, Belinda was ready to leave that pitch in the past, if others would only let him.

"People say I must be awful to give up a hit to a guy off the bench," Belinda told The Post-Gazette in February. "I sort of felt like the scapegoat all winter. But nobody brought up the situation I came into. I'm not a high-profile closer. I'm not a miracle worker. But I tried my hardest. I gave a hundred percent."

Belinda also looked forward to the possibility of being the Pirates' full-time closer. He ended up getting 19 saves in 37 outings with the Pirates, before being dealt to the Royals at the deadline.

Staying with the Royals through 1994, Belinda worked in relief, but not as a closer. He was the set-up guy. And Belinda was fine with that, he told The AP in March 1994. In fact, he felt like a rookie in the new role.

"I'm really learning how to pitch now," Belinda told The AP. "Before I was just a thrower - here it is. Country Hardball."

Then came that first tingling and numbness in May 1998. It was back by August. By September, he learned the cause. Multiple sclerosis is an autoimmune disease that affects the brain and spinal cord, according to The National Institutes of Health.

Back in the clubhouse by the next spring, Belinda talked to The Cincinnati Enquirer about the diagnosis in comparison to that pitch in 1992 that ended the NLCS.

There was no comparison.

"It's your health. It's your life," Belinda told The Enquirer. "That's what you have to take care of first. I knew I'd get back on the mound after a bad hit or losing the game. I knew I was going to get another chance. This, you don't know. That was hard for me to accept mentally. I'm just thanking God now that I am sitting here today."

Belinda got his 29 games for the Reds that season, then his 56 in 2000 between the Rockies and the Braves, ending his career two years after he was diagnosed.

In 2007, The Pittsburgh Tribune-Review caught up with members of the 1992 Pirates. Belinda was then living on a farm, near his hometown of State College, Pa. Belinda's brother Mark noted to the paper that his brother's disease will never go away, but, Mark Belinda reported, his brother was doing OK.