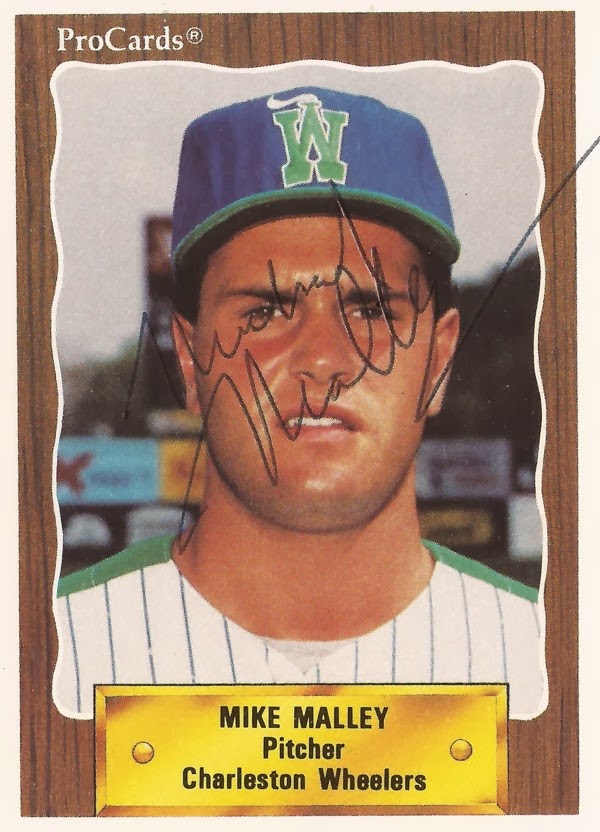 Mike Malley was disappointed to return to the South Atlantic League in 1990, but it didn't show on the field.

In his first few starts, he pitched deep into the game, only giving up a run or two. He also got some relief outings. Then the Charleston Wheeler faced Myrtle Beach. It was a cold day, he recalled, but it ended up like his other outings.

"I had a good game," Malley recalled to The Greatest 21 Days recently. "But the next couple days, I just couldn't get loose.

"That," Malley said, "was the beginning of the end."

There was something wrong, but what that something was wasn't obvious.

What was obvious, though, was he couldn't pitch. Put on rehab the rest of the year, some days he felt right, others he didn't.

Finally a doctor figured it out: Malley had a torn labrum in his shoulder. He needed surgery.

Malley talked about learning the game while growing up in Connecticut, then attending college there and turning pro.

He also talked about having to overcome that third-season shoulder injury only to come back and see the shoulder problems return.

Malley's professional career began in 1988, signed by the Reds as a 36th round pick. He played his first season in the rookie Gulf Coast League, moving to single-A Greensboro in 1989.

His season in Greesboro ended up being his best. In 39 outings, seven starts, Malley went 8-4, with a 3.61 ERA. He also capped off an early-season no-hitter with a hitless ninth.

Malley's starts came down the stretch. He recalled them all as quality starts.

"I thought that I was kind of progressing more, starting to throw more of my pitches for strikes," Malley said.

His work got him invited to the fall instructional league. He called that an honor, as it meant that Reds brass thought something of him. And he again pitched well. He pitched 25 innings and his ERA, he recalled, was around 2.

"That was definitely a confidence booster," Malley said.

Then came 1990 and Charleston. Malley had that early success, but his shoulder problems began.

"I was on top of my game the season before," Malley said. "I started this season pretty good. Now, all of a sudden, I'm not contributing to anything. It was very discouraging."

Malley did get to be a part of a second-half Wheelers run, albeit mostly from the sidelines. The team went on to win the league championship. He recalled getting back into one late-season game.

He also got to see the pivotal transformation of a future Hall of Famer. Charleston teammate Trevor Hoffman started the year as a light-hitting infielder. Hoffman ended it as a reliever.
"Watching him go from basically a utility infielder to throwing on the mound, everybody was in awe," Malley said. "The pitchers were in awe."

Hoffman, Malley recalled, threw bullpen sessions and hit the strike zone with ease. Malley even recalled Hoffman wondering, trying not to be disrespectful, how the pitchers had problems, but he could hit the first baseman from the hole at short.

"It was so true," Malley said. "That's how he was able to transition so easily. He had a great arm and he threw strikes."

That year, though, was Malley's last with the Reds. The Indians took him in the December minor league draft, after reviewing his doctor's reports and progress.

The scout who brought him over, also told Malley he thought the pitcher had the type of arm that could make the big leagues quickly. "That was really encouraging," Malley said.

Malley rehabbed from his surgery back home in Connecticut, working with his brother, who played at Central Connecticut State. When he had no one to work out with, he threw against a wall.

The next spring, Malley found himself competing other players who had much more experience than he did. His arm, also, wasn't all the way back. "I wasn't even ready to pitch in high school, I don't think," Malley said.

The result was a trip to the Carolina League and high-A Kinston. In nine outings, 17.2 innings, Malley gave up 20 earned runs. Ten of those earned runs, Malley said, came in his final outing there, one nightmare of an inning. He was then sent down to short-season Watertown.

"That was truly a test of my character," Malley said.

But Malley went out and pitched, and he had success. In six starts, he had an ERA of 1.50. Along the way, though, he started getting the same feeling in his shoulder, the same feeling that he'd had before. With encouragement from his coach, he pitched on. But eventually it was too much.

Malley elected not to have another surgery. His career was over.

"Do I wish I would have made a different decision? Yeah, probably. What do I have to lose?" Malley said. "But mentally, I just decided that that was enough."


He had even just lost the desire in his heart, he said.

"As a pitcher, the one thing you were always able to do was throw the ball. That was your livelihood," Malley said. "That was my livelihood, being carefree, letting the ball go. I just wasn't able to do that not being healthy anymore."

Once he retired, Malley had designs on staying in the game. He sent letters out to all the organizations looking for a scouting job. He got some part time work, but nothing panned out.

Then the scout who originally signed him, Mickey White, suggested it might be good for Malley to move on, get a job in the real world. So that's what he did. Malley worked for 14 years as a parole officer for the state of Connecticut. He now works as a bail bondsman.

He's also now married with four children, two of his own age 15 years and 18 months, and two step children, ages 21 and 14. He and his current wife have been together 10 years, married for five.

He's done some youth coaching with his kids, but not a lot.

"It was just a very, very great experience," Malley said of his time playing. "I'm just very, very fortunate that I was able to play."

"I had my four years. It was my dream. I had my chance," Malley added. "I'm sure everybody else thinks like that, then you settle into a normal life."

Be sure and read the first part of the Mike Malley interview: Mike Malley, Ninth Inning