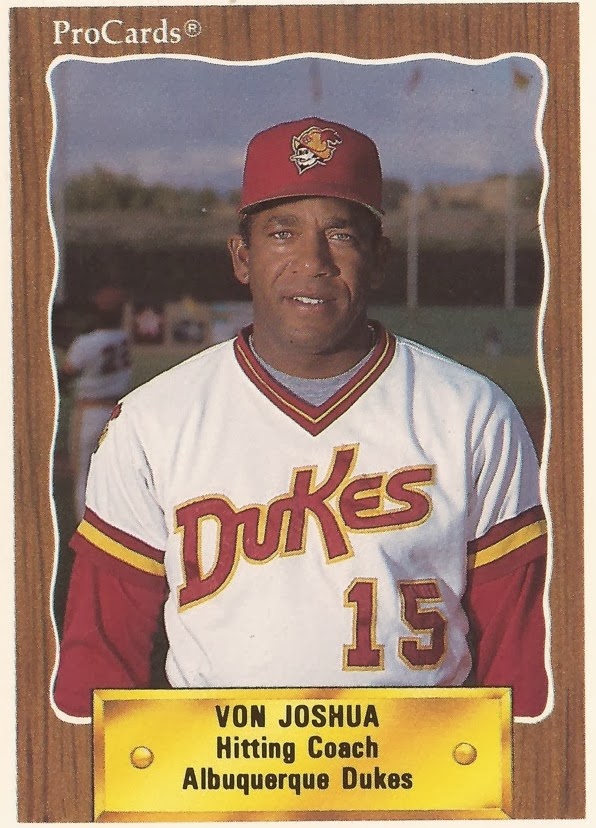 Asked by The Los Angeles Times whether he believed race had played a role in his Dodger coaching career, AA hitting coach Von Joshua, who was black, said he believed it did.

The question came only a few days after Dodger General Manager Al Campanis' infamous appearance on Nightline where the GM said he believed blacks "may not have some of the necessities" to be a manager.

"You can see the writing on the wall," Joshua told The Times in a story that appeared three days after the Nightline broadcast. "I'm not stupid. I see myself getting caught up in the shuffle. I haven't heard one thing about moving up. Not one peep."

Joshua had been an instructor with the Dodgers since 1984, having spent parts of six seasons in Los Angeles as a player. He was also the first full-time black minor league coach for the organization, The Times wrote. But he had never been asked to go to winter instructional ball.

Joshua went on in 1988 to get that promotion, to hitting coach at AAA Albuquerque. He would also later join the White Sox system and spend parts of four seasons as their major league hitting coach before joining the Cubs and serving part of 2009 as hitting coach for the North Siders.

For 2010, Joshua has returned to AAA Iowa, serving as hitting coach under Hall of Famer Ryne Sandberg.

Joshua stayed with the Dodger system through 1992, serving the rest of his time at Albuquerque. He was later credited with developing 62nd round draft pick Mike Piazza into the player he became. Joshua worked with Piazza directly for much of 1992.

It was for 1993 that Joshua joined the White Sox system, first at single-A South Bend, then making it to AAA Nashville in 1997. It was in 1998 that he made the White Sox as the major league hitting coach.

"I know this is a proving ground for me," Joshua told The Chicago Tribune when he was hired that May. "But I've been preparing 15 years and I'm ready. I might not know much about physics, but I know the physics of the swing."

By May 2001, Joshua was out on the South Side. His White Sox weren't hitting and he was the fall guy. Joshua later called himself the scapegoat.

"I was hurt for a long time," Joshua told The Tribune in 2004, then hitting coach at the Cubs' AA team in West Tennessee. "Somebody has to be the scapegoat when things don't go right. It's just, how can you go from being the best thing since sliced bread, and two or three months later, you're stupid? I was hurt."

"I told him that it wasn't anything that I was upset with him, he didn't do anything wrong," Cubs' GM Jim Hendry told the AP in October. "But when you come up from the system in the middle of the year, if things don't make significant difference in improvement, then obviously in my opinion we need to try something different."