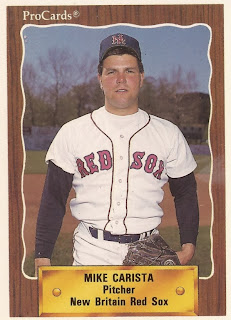 Mike Carista came back from arm surgery in 1987 and won 13 games at single-A. His task in 1988 was to replicate that feat at AA.

By June, Carista was doing just that at New Britain, with a 1.25 ERA, according to The Reading Eagle.

"I know I can, so I'm just doing what I'm supposed to do," Carista told The Eagle.

Carista continued pitching for two more seasons, but his career ended in 1990 after a dispute over a change in roles to reliving. He then returned years later, for one last and unsuccessful attempt at the bigs.

Carista's career began in 1985, taken by the Red Sox in the 14th round of the draft, out of Saugus High School in Massachusetts.

With the Red Sox, Carista started at short-season Elmira. He went 6-5, with a 2.30 ERA. He then lost all of 1986 to that arm surgery, recording just one outing on the year.

Carista returned to the field in 1987, making single-A Greensboro. He went 13-6 on the year, with a 2.89 ERA. He picked up his eighth win in June, a 5.1-inning outing. He also made the South Atlantic League All-Star team.

At New Britain in 1988, Carista ended with an 8-10 record, and a 3.45 ERA. He won league Player of the Week honors in late April. He also had an eight-inning, five-hit performance in August.

Carista stayed at New Britain into 1990, when he was switched to relief. He got into 17 games that year, one start and he was released, ending his career.

His career also ended in a dispute. Carista wanted to stay as a starter, according to The Hartford Courant. He spoke to The Courant years later, in spring 1995 as one of the prospective Red Sox replacement player.