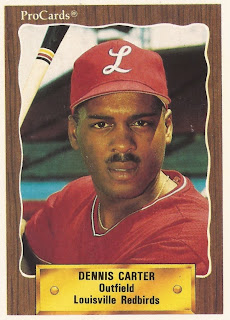 At Springfield, Carter hit .270, with 13 home runs and 28 stolen bases. And the Cardinals apparently felt Carter could do even better.

That off-season, the Cardinals felt he needed to be protected, placing Carter on their winter roster, according to The Associated Press.

Carter, though, would never make a summer major league roster. He played seven professional seasons, making AA - and one brief AAA photo shoot - but he never made the majors.

Carter's professional career began in 1984, taken in the first round of the January draft out of Chipola College in Florida.

He moved to short-season Erie in 1985, getting a short look at single-A Savannah. Between the two, he hit .265 with 11 stolen bases.

Coming off that year in Springfield, Carter moved to AA Arkansas for 1987. His average dropped to .249 and his stolen bases dropped to three.

For 1990, Carter appeared poised to start at AAA Louisville, appearing at a baseball card photo shoot in the Louisville Redbirds uniform. (A comparison of the photo on his CMC card and an earlier St. Petersburg Carter card appears to confirm it's him in the CMC photo.)

But Carter was never credited with wearing a Redbirds uniform in a game. He finished out his career that year with 14 games with the Braves at AA Greenville, ending his career short of the majors.

Carter went on to coach youth the game, serving with the Fort Bend Texans in the Houston area. He passed away in February 2016 at the age of 51.