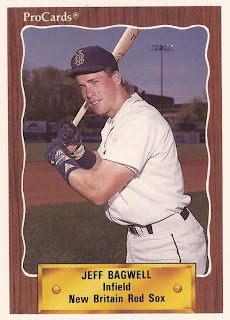 There just didn't seem to be room for Jeff Bagwell, the Patriot Ledger News Service wrote in spring 1990.

The minor leaguer did keep putting up numbers and something did happen. He got traded to the Astros and became a Houston legend.

Now, all the numbers Bagwell continued put up have him in a good position to become a Hall of Famer himself, if not in the current balloting, in the coming years.

Then, in late August, the Red Sox felt they needed the Astros' reliever Larry Anderson, offering a third baseman in exchange - Scott Cooper, the South Florida Sun-Sentinel wrote later. The Astros, though, wanted - and got - Bagwell.

"I never thought I'd do that well," Bagwell told the Associated Press after winning the rookie honors. "I got lucky. I got a chance to play and that was the main thing. After you get the chance, you've got to do well."

In 1997, though, as the debate over the now-banned androstenedione raged, Bagwell admitted to to The Houston Chronicle that he used it, according to Sports Illustrated. Bagwell also later told the St. Louis Post-Dispatch he didn't use it long and didn't believe it helped him hit home runs, according to the Cincinnati Enquirer.

In 2011, his first year of eligibility for the Hall of Fame, Bagwell received 41.7 percent of the vote, numbers thought depressed by steroids speculation, according to AOLNews. Bagwell told reporters that such speculation was "ridiculous," according to the site. In 2013, he received 59.6 percent.