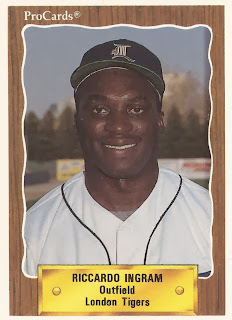 Riccardo Ingram had a lot to think about making his major league debut, according to Knight-Ridder Newspapers.

He made that debut in his seventh professional season as a pinch runner, his team down 10-3.

"I was thinking of everything I learned of in little league about base running," Ingram told Knight-Ridder Newspapers. "Freeze on a line drive. Don't do anything stupid, because my run doesn't mean anything."

Ingram eventually saw time in two big league seasons, before starting a new career as a coach in the minors.

It was during that second career, as a coach, that Ingram faced something far more serious than anything he could have faced on the baseball field. In 2009, Ingram was diagnosed with a brain tumor.

Ingram's professional career began in 1987, taken by the Tigers in the fourth round of the draft, out of Georgia Tech.

At Georgia Tech, Ingram played both football and baseball. He also was good in both, winning All-ACC in both. He also won the conference's Athlete of the Year award for 1987, according to The Associated Press.

With the Tigers, Ingram started at single-A Lakeland and single-A Fayetteville. He played 1989 at Lakeland and then moved to AA London.

Ingram moved to AAA Toledo for 1992, staying there for 1993. It was in June 1994 that Ingram made that major league debut. In all, Ingram got into 12 games for the Tigers that year, picking up five hits in 23 at bats.

Ingram moved to the Twins for 1995, getting four games in Minnesota, marking the extent of his major league career.

After completing his career in the minors, Ingram started his coaching career. He spent his first six seasons as a hitting coach, then spent four seasons managing.

Then, in 2009, as a coach for AAA Rochester, the headaches started. It was brain cancer. After undergoing treatment, Ingram was back on the field by 2010.

In 2012, still coaching for Rochester, Ingram recalled the point early on when he heard the odds of survival one year with that type of cancer, just 5 to 10 percent, according to CBSSports.com.