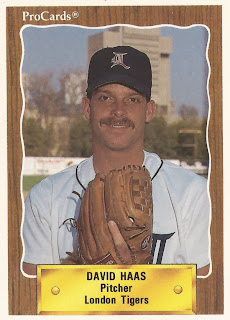 David Haas' picked up the win in his first major league start, getting into the seventh inning in this August 1992 contest with a big lead, giving up a single earned run, according to The Associated Press.

For Haas, though, he wasn't satisfied. A rough start to that seventh inning lead to him being pulled for a reliever.

"That's the thing I'll remember most, unfortunately," Haas told The AP. "That I couldn't finish the inning."

Haas went on to get 10 more starts for the Tigers that year, his second season with time in the majors. He also went further than the seventh on another occasion, pitching a complete game. He ended up getting time in one more big league season.

Haas' career began in 1988, taken by the Tigers in the 15th round of the draft, out of Wichita State University.

"The first couple of innings I came inside a little," Haas told The AP after that shutout. "I was a little wild in the zone. Later on in the game I think that helped my off-speed pitches. I kept the ball down and away and changed speeds."

For 1993, Haas returned to relieving, getting called into 20 games for the Tigers. His ERA went up to 6.11. It was his final year in the majors.

Haas continued playing in the minors through 1997, playing parts of 1995 and 1996 in independent ball.

Haas soon turned to coaching, spending 2001 and 2002 as pitching coach at short-season Boise. In 2002, he worked with future major-leaguer Andy Sisco, trying to get him to do more with less, according to Baseball America.