The Greatest 21 Days caught up with John Toale in October 2011, read the interview: John Toale, Promise to Parents 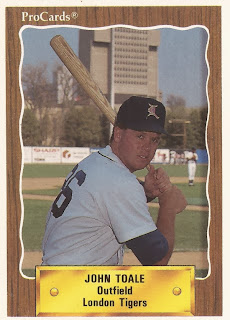 John Toale still looked forward to making the majors by spring 1991, but, he told The South Florida Sun-Sentinel, he also knew that as a veteran of eight seasons in the minors, that might never happen.

"If I don't make it, people will say I was terrible," Toale told The Sun-Sentinel. "I wasn't. Not making it doesn't mean you're bad.
"I haven't made it to the major leagues yet,"

Toale continued, "but I have been able to play professionally for eight seasons. I've also been preparing for the day when baseball is no longer part of my life."

Toale never did make it, but he did follow through on the preparations made years earlier, for when baseball was no longer in his life, getting his Red Sox-funded degree from Florida State.

That year in 1983, the Red Sox selected Toale directly out of high school. He chose to sign with the Red Sox, spurning a full-ride to Florida State. The last part was tempered by when the Red Sox agreed to fund his education, something Toale worked on in the off season, The Sun-Sentinel wrote in 1987.

Choosing pro ball, however, the young outfielder struggled to catch up to professional pitching. He played at short-season Elmira for 1983, hitting just .223.

"Let's face it, in high school all you saw was a couple of fastballs once in a while and a lot of mediocre curves," Toale told The Sun-Sentinel in August 1987. "All of a sudden, I was up against pitchers who were throwing 7 or 8 miles an hour faster than what I was used to seeing. They had sliders, curves, everything."

Toale got his first look at AA that year, 15 games at New Britain. But he hit just .212. It was his final year in the Red Sox system.

Toale spent 1988 between the Mets and the Rangers systems, both in the single-A Florida State League. With St. Lucie in May, Toale knocked in the game-winning run with a late sacrifice fly.

It was a year where Toale had hoped he would move up, not return to single-A. The White Sox picked him up in the spring, then traded him to the Mets. The Mets then sent him back to the Florida State League.

He played much of 1991 in the Royals system, at AA Memphis, playing two games with the Yankees at Albany. Toale isn't credited with playing time in 1992, after that season, he was finally looking at hanging it up, interviewing for a sales job. But he decided to return for another shot, signing with his hometown Marlins.

Back in 1988, Toale was in the middle of that year back in the Florida State League. He was unhappy, Toale told The Sun-Sentinel, but it was his progress he was unhappy with, not baseball.

"Still, I'd rather do this than work in a real job or go to school full time," Toale told The Sun-Sentinel that June in 1988. "I think I'll stay in baseball as long as I can. I'd never want to get out too early. Baseball will tell me when to get out, but I'm not ready yet."

The Greatest 21 Days caught up with John Toale in October 2011, read the interview: John Toale, Promise to Parents