Rick Down helped hitters in majors as coach over 16 seasons, but really wanted to manage

Updated May 2020
As the Angels' Wally Joyner hit in his third season in 1988, Joyner's home run totals were down.

His hitting coach Rick Down, however, knew Joyner had the confidence to pull out of it, Down told The Los Angeles Times-Washington Post News Service that July.

"It's just a matter of time," Down told the news service. "He's been making decent contact. There's not a lot of muscle in his swing. There's a lot of rhythm, a lot of timing."

Down was evaluating Joyner a decade into his own coaching career, having seen time as a coach in college and in the pros. He also saw time as a player in the minors. He has gone on to get extensive time since in the major league dugout, as a big league hitting coach for five other franchises.

Down's baseball career began in 1969, as a late-round pick of the Expos, out of Southgate High School in Michigan.

His playing career lasted eight seasons, making AAA in parts of five of those seasons, but never the majors.

With that over, Down started his coaching career. In 1976, he served as a coach at West Palm Beach. The new coach also tried to get his team to hit, according to The Palm Beach Post.

"What can you do about base hits?" Down told The Post. "Is there somewhere you can order them? Hell, at this stage, I'll try anything."

Whatever he tried, Down continued coaching. And it got him to the majors. In the meantime, Down moved to college, serving as a coach at UNLV for six seasons. He then rejoined the pros, with the Angels, becoming California's major league hitting coach.

He moved to the Yankees system for 1989, becoming manager at AA Albany for 1990. He then returned to the majors in 1993, as Yankees hitting coach. H's then credited as serving as a major league hitting coach each year through 2007.

Down served as hitting coach for the Orioles, Dodgers, Red Sox, Yankees again and then the Mets. He's also served as a scout.

With all that coaching, though, what Downs really wanted to do someday was manage in the majors, according to The Baltimore Sun. He was the runner up for big league jobs at least twice, with the Angels in 1997 and the Dodgers in 2001. He was also a finalist with other teams, but didn't get the job, The Sun wrote.

He served as hitting coach for the Red Sox in 2001. As that season began, Down described his coaching style to The Hartford Courant.

"I would say I'm a hands-on kind of guy," Down told The Courant. "I would say I'm very proactive. I don't sit around too much. ... If I see something wrong, I'm going to go to him immediately. I think that's what my job is." 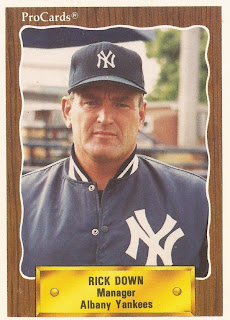