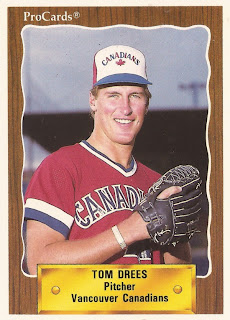 After throwing not one, but three no-hitters at AAA Vancouver in 1989, Tom Drees found himself in Chicago in September, but not in the way he'd expected or hoped, The Chicago Tribune wrote.

He was there to be honored between games of a double header for those no-hitters. He wasn't there to pitch. He also wasn't "amazed" that was the case.

"Disappointed may be a better word," Drees told The Tribune that September. "Frustrated might be another word. Amazed? I've seen too many things in this game already to be amazed."

Years later, Drees speculated to MiLB.com on why he and fellow Vancouver teammates didn't get called up that September. But Drees did finally get called up, two years later.

Called up in September 1991, Drees got into just four games, all in relief. And, despite his success in the minors, and a career that spanned nine professional seasons, those were the only games Drees would see in the majors.

Drees' career began in 1985, taken by the White Sox in the 17th round out of Creighton University. He played that year in rookie ball, moving to single-A Peninsula and single-A Daytona Beach in 1986 and 1987.

In June 1987, Drees took a no-hitter into the seventh inning, before losing it on a single. But that turned out to be just a warm up. After playing 1988 at AA Birmingham, Drees moved to AAA Vancouver for 1989.

"I like to think I'm ready," Drees told The Associated Press after losing his bid for three no-hitters in a row. "My (pitch) location is good and my confidence is good. I'd like to find out if I'm ready."

Drees was also throwing those no-hitters after having arm surgery the previous fall. White Sox GM Larry Himes noted that to reporters when talk came to calling Drees up. Before the no-hitters, talk was that Drees might need to be sent down to AA, Himes told reporters, according to The Tribune.

In August, Drees got his third no-hitter, a 5-0 win over Las Vegas. He became the first pitcher in the league with three no-hitters in a season. White Sox GM Himes was in attendance, The AP wrote.

"It's a great feeling," Drees told The AP afterward. "After the first two, this season kind of took a downward turn for me. I just haven't been pitching well. Now with this game, hopefully I will be able to finish the season strong."

In the middle of the season, and Drees' no-hitters, came a one-day team walk-out over late paychecks. To MiLB.com in 2006, Drees cited that walk-out as reason why he and others weren't called up that September.

White Sox officials, though, told The Tribune in spring 1990 they simply didn't want to put more stress on Drees' surgically repaired arm. Drees just looked around. Other players in other organizations, whom he'd outpitched, were in the majors.

"You go home in September and everybody's saying, 'What are you doing here? Didn't you have a good season?'" Drees told The Tribune. "It was tough."

Drees returned to Vancouver for 1990. He went 8-5 that year, with a 3.98 ERA. He also had another surgery that off-season, on his pitching shoulder, according to The Tribune.

Drees, though, came back and pitched another season at Vancouver, going 8-8 with a 3.52 ERA. This time, he got his call-up. In his debut, Drees went two innings, giving up two earned runs. Drees also gave up a home run to the first batter he faced.

Drees got just four outings, giving up 10 earned runs in 7.1 innings of work. He played just two more seasons, at AAA with the Mariners, Rangers and Twins organizations, before his career finally ended.

Drees spoke to MiLB.com in 2006, working then as a financial consultant in his home state of Minnesota. He talked about his 1989 season with his three no-hitters, telling the site he never tires talking about them. He did wish, though, that he had more time to prove himself in the majors, as a starter.

"You never want to say making the big leagues is anticlimactic, but it pretty much was coming off '89, where I had a pretty good year and was on a roll," Drees told MiLB.com. "I had never pitched out of the 'pen, and then to get a couple of mop-up games at the end of '91. Starting was all I ever did in the Minors, and I never got a chance to start for 10 or 12 games in the Major Leagues, and that's what sticks with me the most."