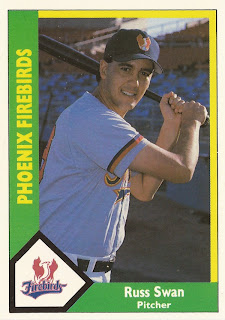 Russ Swan picked up his first major league win in June 1990. He also almost picked up a no-hitter.

The Mariners starter got into the eighth inning against the Tigers before giving up the first hit to Cecil Fielder. Seattle ended up winning 5-2.

"I've been really wild and really hurting myself," Swan told The Associated Press afterward. "Tonight, I finally stopped worrying about throwing strikes and just did it."

Swan was in his second season in the majors, having picked up two starts the previous August with the Giants. He went on to pitch in six big league campaigns, his last coming in 1994.

Swan's professional career began in 1986, taken by the Giants in the ninth round of the draft, out of Texas A&M University.

Swan played that year between short-season Everett and single-A Clinton. He went 8-3, with a 2.61 ERA between them.

In 1989, Swan hit AA Shreveport for the first time, then AAA Phoenix. Then, in August, big league injuries landed Swan in San Francisco. For the Giants, Swan got two starts, giving up eight earned runs in 6.2 innings.

He debuted Aug. 3, two hours after arriving on the plane from Phoenix. He'd even missed his first flight, but made the game in time to be told he was starting that night, The Los Angeles Times wrote.

"I walk in the dugout, and (Manager) Roger (Craig) says, 'Hurry up,' and I said, 'What?' " Swan told The Times. "When they called me up, I didn't even know whether I would be a starter or a reliever. And now I'm starting. It was a shock."

"They were hitting everything," Swan told The Associated Press. "I hope this doesn't hurt me, because I know I can pitch here. I just have to get ahead in the count and keep the ball down."

After two more outings with the Giants in early 1990, Swan was sent to the Mariners in his home state of Washington. With that first win, Swan went 2-3 in 11 outings with Seattle, eight of them starts. Turned reliever in 1991, Swan got into 63 games with a 3.43 ERA.

Swan finished out his big league career with 23 outings back in Seattle in 1993, then 12 in 1994 with the Indians. He continued playing in the minors through 1996, ending his professional career.