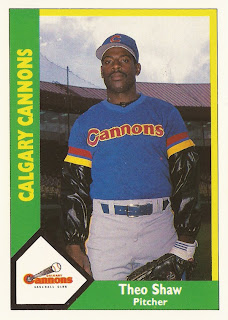 Theo Shaw was like a kid, he told The Chicago Tribune that July in 1985. After a injury-induced try at being a position player, the team doctor told him he didn't have to be a position player anymore.

He was ready to pitch again.

"I was walking so fast to get to the car that I was running," Shaw told The Tribune. "I couldn't wait to get back here. It's worked out for me and now I'm loving it."

Shaw returned to the mound and pitched five more seasons as a pro, part of a career that spanned 11. Though he continued pitching, Shaw never had the opportunity to pitch in the majors.

Shaw's career began in 1980, taken by the Royals in the 16th round out of Proviso East High in Illinois.

Shaw pitched that first year with the Royals rookie Gulf Coast League team, going 5-7, with a 3.39 ERA. He picked up a win in the fall instructional league that October, giving up three unearned runs over five innings.

Shaw split 1981 between single-A Charleston and single-A Fort Myers. He went 8-3 between them, with a 2.56 ERA. That September, described as the Fort Myers ace, Shaw gave up just one hit in seven innings, before allowing a run and taking the loss in the eighth.

It was in 1983, according to The Tribune, that Shaw suffered the injury that plagued him over the next two seasons, injuring his elbow on a pitch. The injuries amounted to two stress fractures.

Shaw then spent his season as a position player. Shaw got into 80 games, hitting .204.

His playing days over, Shaw spent several years in the minors as a coach, at Eugene, Spokane, Delmarva and, in 1997, West Palm Beach.

At Eugene in 1994, Shaw watched over a pair of young pitchers, working with them to improve their command, The Eugene Register-Guard wrote. And Shaw saw improvement.