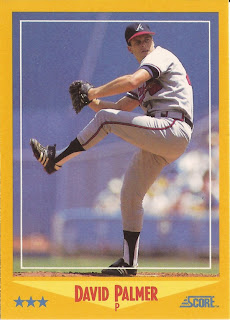 David Palmer was pitching well, and hoping for rain.

Pitching for the Phillies, Palmer didn't allow a hit to a Cardinal batter until the sixth inning, the only hit he gave up in the 2-0 Philadelphia win.

"I was thinking if we could get some rain (after the fifth)," Palmer told The Associated Press, "I'd have another no-hitter."

That other no-hitter came four years earlier, with the Expos, the rain-shortened, perfect-game variety.

That earlier perfect game is referenced on the back of Palmer's 1988 Score card. The card came in a repack that's been sitting by my desk since a trip to Cooperstown over the summer.

The repack consisted solely of 1988 Score cards. I've also got several other regular packs over there that still have yet to be opened. 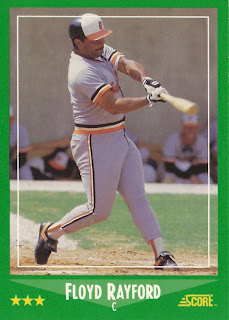 Rayford's final season in the bigs was in 1987, making his 1988 cards his last. On the back of his Score card, Rayford is called "a versatile player who can fill in at catcher and third base." He also gave the Orioles a strong "rightanded" bat off the bench. The 1988 Score cards have a lot of text on the back, and with that come typos. 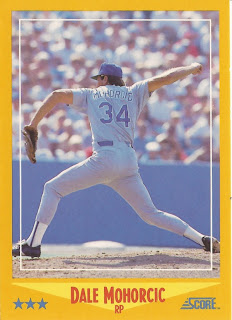 Dale Mohorcic debuted with the Rangers in 1986 at the age of 30, his Score card notes. He was the oldest rookie in Rangers history. He then went on to pitch in 13-straight games, Score notes.

Mohorcic ended up pitching in five major league seasons, his last coming in 1990. He made the CMC set as a member of the Indianapolis Indians. He has yet to be featured here. 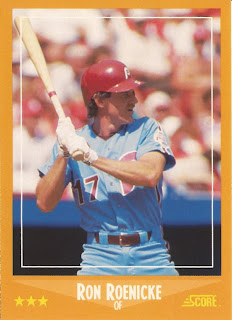 Ron Roenicke's Brewers just got eliminated by the Cardinals in the NLCS. This is Roenicke on his 1988 Score card, playing for the other team the Cardinals beat, the Phillies.

Roenicke played eight seasons in the majors as a player, his last coming with 14 games in 1988 with the Reds. His big league managerial career started in 2011.

With the Phillies in 1987, Score called Roenicke "an ideal 24th man ... a switch-hitting handyman who played all three outfield positions in addition to pinch-hitting duties." 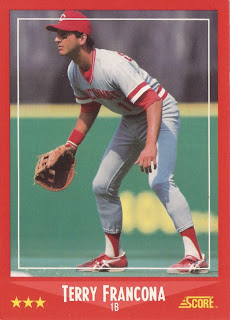 Then there's Terry Francona, who just concluded eight years as manager for the Red Sox. Before that, he spent four seasons as manager of the Phillies. His playing career lasted 10 seasons.

It looks like Francona just missed being in the CMC set himself. He got into just three big league games in 1990, all in April with the Brewers. He was released by the Brewers April 27, then signed by the Cardinals May 5.

Francona played out the rest of the season at AAA Louisville. From my experience, the AAA player lists and photo days seem to have taken place that first week in May. And Francona just missed being included.