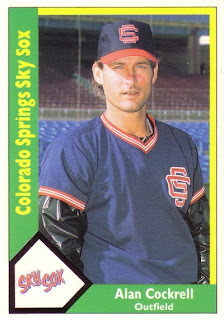 For Alan Cockrell, the choice was an easy one.

The two-sport star at the University of Tennessee, quarterback of the Volunteers football team, signed with the San Francisco Giants in 1984. He simply loved baseball more.

"I'll always be a Big Orange fan," Cockrell told reporters after making his decision. "But how many people get to do something they truly love for a living? I'm playing something that's a lot easier on my body and something I truly enjoy."

Cockrell showed his love for baseball by playing it professionally for 13 seasons, getting into 1,423 games. Cockrell played all but the final nine - played more than a dozen years after signed with the Giants - in the minors.

Cockrell has continued in the game after his playing career ended, as a minor league manager and major league hitting coach. Most recently, Cockrell served as hitting coach for the Mariners in 2010.

Cockrell's professional career began that year in 1984, taken by the Giants in the first round of the draft out of Tennessee.

At Tennessee, Cockrell played both baseball and football. Cockrell was the starting quarterback on the football team in 1982 and 1983. For the baseball team, Cockrell was an All-American in 1984.

With the Giants, Cockrell played that first season largely at single-A Fresno, hitting .215 in 61 games. In late July, Cockrell reaffirmed his choice of baseball over his final year as Tennessee quarterback.

To The Associated Press, Cockrell said he missed football, but there was no question he was happy with his decision.

"I chose to play this game," Cockrell told The AP, "and I'm glad I did. It's been a pretty good adjustment for me, but I haven't looked back. I felt it was the best opportunity in the world for myself and Paula, my wife. I had to jump at it."

Cockrell made AAA for the first time in 1987, at Phoenix. Then, in late 1988, Cockrell was traded to the Twins. He finished out the year at AAA Portland, returning there for 1989.

Traded to the Indians in April 1990, Cockrell had his best season yet, at AAA Colorado Springs. He hit .330 with 17 home runs. He also struck out only 68 times in 113 contests. But he also didn't make Cleveland.

Taken off waivers by the Mariners in spring 1991, Cockrell spent that season at AAA Calgary. He hit .290, with 11 home runs. That May, Cockrell posted six hits in one game, a 24-5 win over Tacoma. The six hits were a league record.

Cockrell moved back to the Indians system for 1992, then to the Rockies in 1994. He played his final three seasons at back at Colorado Springs.

Then, at the end of his final season, in 1996, Cockrell made the majors as a September call-up. He got into nine games, got to the plate nine times. He got two hits, one a double. And he hit one sacrifice fly.

His playing career over, Cockrell first became a scout for the Rockies, then a manager in the minors. In 2001, he became the Rockies roving hitting instructor.

In 2002, he had a stint as the top club's hitting coach in Denver, returning to that job in 2007 and 2008. In between, Cockrell served as hitting coach at Colorado Springs.

"I was very fortunate to have the opportunity the first time, because it made me realize that I had a lot of things I needed to improve upon," Cockrell told MLB.com after returning to the Rockies as hitting coach for 2007. "I worked on myself, that was the first issue I needed to tackle, and as I became more confident and gained more experience, things just began to fall into place."

Cockrell became the hitting coach for the Mariners in 2009, continuing there until a team slump led to him being let go in May 2010.

In November 2009, as Mariners hitting coach, Cockrell returned to Tennessee, visiting his old baseball team. He also spoke to UTSports.com about his football background and how that prepared him for his baseball career.