But one of his coaches at Garrard County High School in Kentucky believed he knew what Simpson's post-high school sports career would center around, according to The Advocate-Messenger.

"He has a good arm in football and probably could play some small college football," the coach told The Advocate-Messenger. "He could-probably also play a second guard for a small college basketball team. But if you take a look at what he has the chance to be the most successful at it would have to be baseball. That's where his heart is, too."

Simpson went on from Garrard County to play in college, at Eastern Kentucky. He then went on to play baseball as a pro. His pro career, though, lasted a single campaign, one played at short-season Welland.

Simpson's pro career began and ended in 1990, taken by the Pirates in the 21st round of the draft out of Eastern Kentucky. Simpson was also credited by his given first name, Shelton Simpson.

At Garrard County, Simpson helped his football team to a win, throwing two passes for two touchdowns in an August 1984 game.

Simpson returned home to Garrard County become a fireman. He also returned to his old school and served for a time as the school's baseball coach, before leaving in 2012 to spend more time with his family. 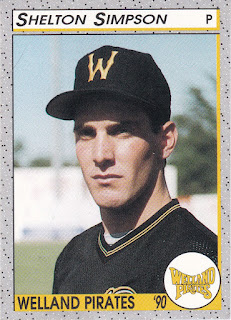