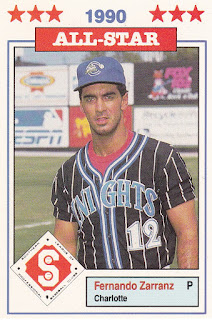 The Peoria Chiefs' 1988 season was about to start and The Bloomington Pantagraph listed off the returning players, among them right-handed reliever Fernando Zarranz.

Zarranz, the returning players and new players had the Chiefs in good position for that year's campaign, new Zarranz teammate Brett Robinson told The Pantagraph.

Zarranz returned to Peoria that year to start his fourth season as a pro. He went on to play in three more seasons after that. He made AAA, but not the bigs.

Zarranz' career began in 1985, taken by the Cubs in the 14th round of the draft out of St. Thomas Aquinas High in Florida.

Zarranz started with the Cubs at short-season Geneva. He went 6-3, with a 4.10 ERA in 19 outings, five starts. He gave up two earned in six innings of work in a July game.

Zarranz played 1989 between Peoria, Winston-Salem and AA Charlotte. He then played 1990 largely at Charlotte, with another look at Iowa. He went 3-3, with a 2.09 ERA and picked up 13 saves over 51 relief outings at Charlotte that year. He also made the league's all-star team.