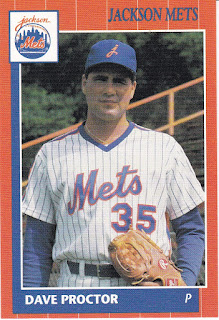 Dave Proctor's coach at Allen County Community College thought highly of him. The Mets did, too.

"Dave's got the world by the horns," McLean told The AP. "I think he's ready to go out and have a bright future in major league baseball."

"He's a big, strong man who has the potential to be a solid power pitcher," Johnson told The Record.

Proctor, however, never lived up to the lofty expectations that came with his status as a first-rounder as injuries helped end his career short of the majors.

Proctor started with the Mets at short-season Little Falls. He went 5-3, with a 4.21 ERA over 12 starts.

He moved to single-A St. Lucie for 1989. In 22 outings, 21 starts there, he went 7-6, with a 2.36 ERA. He struggled in an August game, giving up five earned in four innings and 11 runs overall against Vero Beach, according to The Palm Beach Post.

"I had a little trouble finding the (strike) zone for a while, but it wasn't all that bad," Proctor told The Post afterward. "(The Dodgers) were just swinging the bats tonight."

Then Proctor got injured. He had been set to join AA Jackson for 1990, but an injury to his elbow led to surgery in May and a lost season, according to The Jackson Clarion-Ledger.