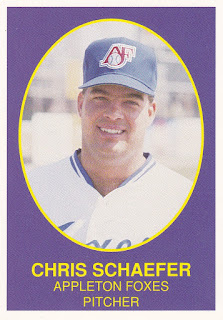 Less than a week after signing his first professional contract in June 1989, Chris Schaefer found himself about to take the mound for the short-season Eugene Emeralds.

He was taking the mound in the season opener.

"It's my first pro start," Schaefer told The Eugene Register-Guard the day before the game. "I'm sure I'll be a little nervous, but it's everybody's goal to move up, and this is where it starts."

For Schaefer, he eventually moved up to single-A Appleton the next year and he got a game at AA Memphis. He never got higher. He saw time in just three professional seasons.

Schaefer's career began that year in 1989, taken by the Royals in the 10th round of the draft out of Indiana State.

At Indiana State, Schaefer won second-team all-conference in 1989. He also struck out 14 batters in a March 1989 contest and again the next month.

Schaefer started with the Royals at Eugene. He got 15 starts, putting up a 7-4 record and a 2.47 ERA.
He ran into some trouble in an August game, giving up five earned in 7.2 innings.

"I never really felt like I was in a groove," Schaefer told The Register-Guard after that August game. "No excuses. I just didn't get the job done."

In his 1990 season, though Schaefer only got 14 total outings. He returned for 1991, but his return was to rookie ball. It also lasted just two games. In those two outings, he went three innings, giving up one earned. They were the final two outings of his career.