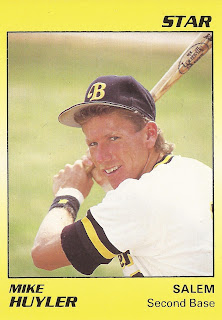 Mike Huyler welcomed the move to AA Harrisburg in mid-1990. He started his third season in the pros at high-A Salem. He hadn't yet seen AA.

"It was great to get the call," Huyler told The Los Angeles Times that July. "I had to look on a map to see where I was going, but it was easy to find. It was only a five-hour drive."

While he got that call in mid-1990, Huyler never got the higher call to the majors. He ultimately played in six seasons. He never got higher than AA.

Huyler's career began in 1988, taken by the Pirates in the 13th round of the draft out of Golden West College in California.

Huyler picked up three hits in a March 1988 game for Golden West. He then played later that year at short-season Watertown. He hit .161 over 42 games.

He moved to single-A Augusta and Salem for 1989. He hit .242 on the year between them. He picked up 7 hits in his first 12 at bats for Salem mid-year. He hit two home runs in his first two at bats.

"I can't explain that," Huyler told The Newport News Daily Press of those home runs. "It was a shock to me and to everybody. It was great to do it in my first game in front of the home fans."

In spring 1992, Huyler hit a pinch-hit grand slam to win a March game, according to The Pittsburgh Post-Gazette.

"That was the best feeling ever rounding the bases," Huyler told The Post-Gazette afterward. "I don't think there could be a better feeling, unless it was the World Series. I felt great at the plate. I knew something big" was going to happen."

Despite that home run, Huyler moved to the Brewers system for the season. He played that year at single-A Beloit and the next at high-A Stockton to end his career.