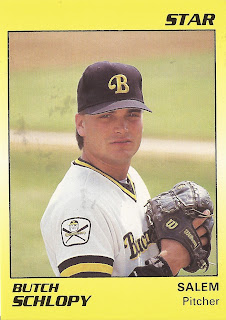 "We made a concerted effort last year to sign left-handed pitching, knowing the organization needed it," Keller told the Post-Gazette. "And left-handers are getting a better opportunity to stay longer in the organization."

By that point, Schlopy had stayed three seasons in the Pirates organization. He played in two more. He never made AA.

Schlopy's career started in 1985, signed by the Pirates as a free agent out of Kane Area High School in Pennsylvania. Schlopy was also credited by his given name, Clifford Schlopy.

Schlopy played 1988 largely at single-A Augusta. He picked up an extra-inning relief win in August. He saved nine games.