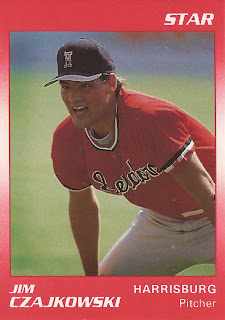 Jim Czajkowski made the majors in late-July 1994 and then came the strike.

For Czajkowski, the important part of that was that he made the majors, he told The Florence Times-Daily that August.

"It's not frustrating because I'm in the big leagues and that's the goal of every 10, 11 and 12-year-old who ever played the game," Czajkowski told The Times-Daily. "I got here through hard work, perseverance and believing in the Lord. It's a dream come true. Even though there's a strike, I'm still a big leaguer."

Czajkowski made his major league debut July 29, 1994 for the Colorado Rockies in his ninth season as a pro. He played his final game of the season - his fifth game as a pro - Aug. 9, the third-to-last game before the strike.

While he played three more seasons, Czajkowski never got back to the majors.

Czajkowski has spent his time since his playing days trying to help other players make the majors, serving as a minor league pitching coach now for more than a decade.

Czajkowski's professional career began in 1986, taken by the Braves in the 29th round out of the University of North Alabama in Florence, Ala.

Czajkowski began at rookie Idaho Falls. He also began as a starter. In 16 outings, 13 starts, he posted a 3.65 ERA. He then moved to relieving full-time at single-A Sumter in 1987.

He hoped the move to relieving would help him make the goal of the majors, he told The Sumter Item. He also had himself a good season, ending with a 2.23 ERA and 20 saves in 50 outings.

Czajkowski stayed with the Braves through 1989. He made it briefly to AA Greenville, but couldn't get going. He moved to the Pirates system, then the Brewers for 1990. He played at AA El Paso in the Milwaukee system for 1991 and 1992.

After moving to the Cubs system for 1993, Czajkowski arrived with the Rockies at AAA Colorado Springs for 1994, his ninth season as a pro.

Czajkowski pitched well at Colorado Springs, well enough to get talk of moving up to the Rockies by July.

"I may be old age-wise, but physically I'm still young," Czajkowski, then 30, told The Times Daily then. "I'm still able to throw in the 90s."

Czajkowski ended up getting his call. In his five games, 8.2 innings, Czajkowski gave up four earned runs. And then he was done.

He played back in the minors for three more seasons, ending in the Blue Jays system in 1997, but he never returned to the bigs.

By 2000, Czajkowski had started his new career as a coach. He served that year and four more as pitching coach for the Braves at rookie Danville.

He moved to single-A Rome for 2005. He told The Rome News-Tribune that April that he looked to long-time Braves pitching coach Leo Mazzone for a model.

"Generally, my philosophies are Leo's philosophies," Czajkowski told The News-Tribune. "When I was with the Braves early on, (Mazzone) was the minor league pitching coordinator ... and I really liked a lot of the programs he already had in place at the time."

For 2011, Czajkowski moved to the Blue Jays system, coaching at short-season Vancouver. He made his return to AA in 2014, taking over pitching coach duties for the Blue Jays at AA New Hampshire.